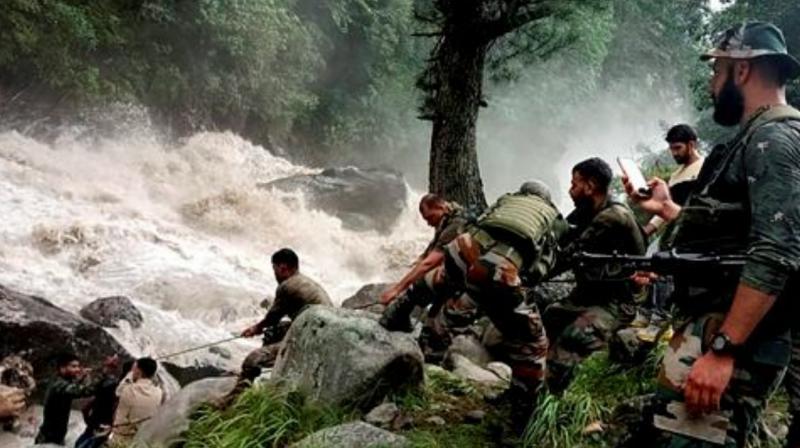 Army personnel during a rescue operation after flash floods due to a cloudburst at Hanzor in Kishtwar district. (Photo: PTI)

At least, seventeen people were killed and scores others injured on Wednesday in a series of flash floods triggered by cloudbursts in Himachal Pradesh and Union Territories of Jammu and Kashmir and Ladakh.

Also 14 persons are missing and dozens of residential houses, bridges, a mosque, standing crops and a mini power plant have been damaged, the officials said.

Amid incessant rains, a cloudburst also hit Amarnath but no loss of life or damage to the revered cave-shrine situated at a height of 13,000 feet (3882 m) in lower-Himalayas in south Kashmir was reported.

At least, seven persons including three women were killed, and 14 others went missing after half a dozen residential houses were swept away by flash floods triggered by a cloudburst in a remote village of Jammu and Kashmir’s mountainous district of Kishtwar early Wednesday.

The officials said that 17 persons injured in the calamity have been rescued and removed to hospital. A team of the State Disaster Relief Force (SDRF) has reported that five of the injured persons are in critical condition and have been shifted to district hospital Kishtwar, while others are being taken care of by two medical teams.

A spokesman of the district police said that six residential houses, a ration depot and a bridge were damaged in the impact of the cloudburst that hit Hanzor village of Kishtwar’s Dachhan area.  Soon teams from the J&K police, the Army, National Disaster Response Force (NDRF) and civil administration were joined by local volunteers to begin a massive rescue and relief operation which was under way, the spokesman said. A report received here said that hostile weather is hampering the rescue and relief operation.

SSP Kishtwar Shafqat Hussain Bhat said that seven bodies had been recovered till Wednesday evening. “The search for the missing persons is going on. Initial reports suggest that 25-26 people are missing,” he added.

The Kishtwar police in a statement said that twenty persons were missing and identified those whose bodies were recovered by Wednesday afternoon as Saja Begum, Rakila Begum, Ghulam Nabi, Abdul Majeed, Zaytoona Begum and Tauseef Iqbal. It confirmed 17 persons have been injured in the incident.

Kishtwar’s additional SP Rajendra Singh told this newspaper over the phone that about forty J&K policemen headed by the area Station House Officer reached the scene of occurrence at 4. 30 am to join the rescue work which had already been started by the local people.

“Despite the difficult terrain and incessant rains, the rescuers who have since been joined by a column of the Army and NDRF personnel are trying to locate  14 missing persons who are believed to have been buried under the mudslides and debris of the houses swept away by flash floods. It is a very challenging and difficult task and everything is being manually as machines or equipment is available,” he said.

No loss of life or damage to the Amarnath shrine, situated at a height of 13,000 feet (3882 m) in lower-Himalayas in south Kashmir, was reported, assured the Jammu and Kashmir government.

A statement issued by them said that due to the cloudburst in higher reaches, there were gusts of water near Amarnath and the mountain stream (nallah) flowing down the cave-shrine started gushing heavily.

It said that a joint team of Shri Amarnathji Shrine Board (SASB), the J&K Police and the Army acting swiftly, evacuated all the staff present close to the nallah. “No loss of human lives or property is reported,” the statement said.

It said, “As per the latest report, the holy cave-shrine is safe. Home Minister Amit Shah also spoke to Lieutenant Governor, Manoj Sinha, who briefed him about the present situation and efforts made by the joint team of officials, the police and the Army”.

The statement quoted Sinha as saying, “The situation is under control and the flow of water in the nallah is normal. A team of SDRF is camping at Baltal (a basecamp of the cave-shrine) and on stand-by to meet future challenges. An NDRF team is also on stand-by in Srinagar to tackle natural calamities due to incessant rain in the region. The SASB and the administration are closely monitoring the situation.”

Meanwhile, district officials said that as many as 19 residential houses and 21 cowsheds were washed away and two houses were partially damaged in the impact of the cloudburst and resultant flash floods and mudslides. A bridge in the neighbouring Kiyar area was also damaged in the incident, they said. The officials also said that the condition of five of the injured persons is critical.

A J&K government handout said that one more SDRF rescue team from Udhampur has reached Dungdori, Kishtwar, and will join the rescue team early Thursday morning to trace the missing persons. “Due to incessant rain, rescue operation was halted at present,” it said adding that yet another rescue team from SDRF and one NDRF team from 13th Battalion, Ludhiana which reached Jammu, are on stand-by.

Another cloudburst occurred in Padder area of Kishtwar. However, there was no loss of life or damage to the property. Kishtwar’s DC said 60 families were evacuated to safety from the Paddar area in view of incessant rains, which posed a threat to their homes.

A report from frontier district of Rajouri said that a non-local labourer from Chattisgarh was washed away in flash floods while another was rescued, officials said. Rajouri’s DC Rajesh Kumar Shavan said that high alert has been sounded in the district as the situation thrown by incessant rains is “very grim”  In neighbouring Poonch district too the water level in rivers, mountain streams and other water bodies has increased. In southern Anantnag district, about 100 residentioal houses have been partially damaged in flash floods, reports received here said.

Earlier cloudbursts hit two villages-Khangral and Sangra- in Kargil district of Ladakh, causing minor damages to some residential houses and a mini hydro power project but no casualties were reported, the officials said.

A residential house and a mosque were damaged in a similar incident in Kashmir Valley’s northern Bandipore district on Wednesday morning.

J&K’s Lieutenant Governor, Manoj Sinha, announced an ex-gratia of ₹ 500,000 each for the next of kin of those who lost their lives in the cloudburst in Kishtwar. The grievously injured would be given ₹ 50,000 each and ₹ 12,700 under SDRF shall also be disbursed, an official spokesman said here. He added that relief under SDRF for loss of houses, utensils, clothing, household goods, cattle, cattle shed, loss of agricultural land etc. shall also be provided by the Deputy Commissioner, Kishtwar.

Sinha said, “The J&K government will do everything possible to support and protect the affected families. In such trying times, it is our duty to care for those who have been unfortunately affected by these natural calamities.”

Of them, seven bodies recovered, two rescued with injuries and three are still missing, he added.

Lahaul-Spiti Deputy Commissioner Neeraj Kumar said that a team of the NDRF had been requisitioned for rescuing the labourers trapped under the debris of the landslide. In Lahaul-Spiti, several roads have been blocked and around 60 vehicles are stranded due to multiple landslides, State Disaster Management director Mokhta said.

Many roads in various other parts of the state have been blocked due to landslides. A car was damaged in a landslide in Vikas Nagar in Shimla city, he said.

Condoling the loss of lives due to a cloudburst in Kishtwar district, President Ram Nath Kovind said he was deeply saddened by the death of many people.

Prime Minister Narendra Modi said the Centre is closely monitoring the situation in Kishtwar and Kargil.

All possible assistance is being provided to the affected areas, he said, wishing for everyone's safety and well-being. He tweeted, “Central Government is closely monitoring the situation in the wake of the cloudbursts in Kishtwar and Kargil. All possible assistance is being made available in the affected areas. I pray for everyone’s safety and well-being”.

Union Home Minister Amit Shah spoke to J&K Lieutenant Governor Manoj Sinha and Director General of Police Dilbag Singh and took stock of the situation arising due to the cloudburst.

Meanwhile, heavy rains continued to lash various parts of Himachal Pradesh,while most parts of Jammu region have been receiving heavy rains for the past few days with the prediction of more rains till July-end. Authorities in Kishtwar have already asked people living along water bodies and slide-prone areas to remain vigilant.

The Shimla Meteorological Centre has issued a 'red' weather warning, while a MeT spokesperson said widespread intermittent rain is most likely to continue across Jammu and Kashmir till July 30.