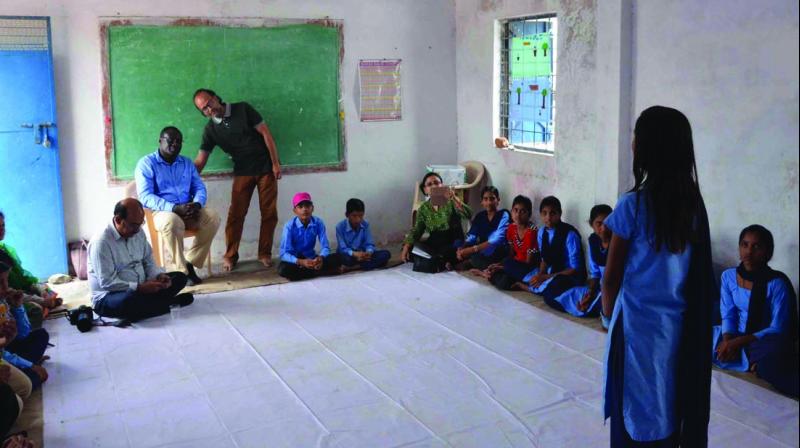 School children taking part in a workshop to discuss issues related to them.

Bhopal: In a first of its kind initiative, more than 50 leading social organisations across the country have joined hands to launch a campaign, christened “one child-two votes”, to mount pressure on the political parties to include children’s issues in their manifesto in the 2019 parliamentary polls.

The non-government organisations (NGOs) have launched an exercise to devise a strategy to persuade leaders of all the political parties to make it their key poll issue in the Lok Sabha elections with a view to putting children’s issues as priority before the country.

The social organisations have held a series of brainstorming sessions here in the last seven months to devise a methodology to push the matter with the parties to include it in their manifestos prominently.

“Children have no political constituency. In electoral parlance, they are called voiceless people. Hence, they are of least concern to the political parties. We want to bust the myth that the children do not count electorally. Rather, each child has at least two committed votes, of his or her parents,” said eminent social worker Sachin Kumar Jain who has taken the lead in the initiative.

“We will make efforts to convince the leaderships of the parties that children’s issues could too be a vote catcher for them since they would be assured of at least two votes, of a father and mother, of the child in a family if they chose to make it one of their key poll planks,” added Mr Jain who headed the NGO, Vikash  Sambad.

Interactive sessions with schoolchildren have been organised in 26 out of total 52 districts in Madhya Pradesh in the past six months to identify the basic issues facing the children.

The programme was sponsored by Unicef. “It has been revealed from the sessions that the children are very sensitive to the issues not only pertaining to them but also to society. Society as well as their own parents has often ignored their feelings, thus keeping many vital issues concerning them under wraps,” Rakesh Malvya, coordinator of the programme, disclosed.

“Whenever a rape incident is covered in a media, our parents confine us to our homes denying us the opportunity to move out for fear of our security. We feel ourselves as caged birds,” said Nikita Choudhury, a student of Class 7 in government high school at Ralayata in Ujjain district, while sharing her thoughts during  an interactive session.

Her classmate N. Bagholia made an interesting observation revealing why the child marriage practice was still prevalent in rural Madhya Pradesh.

“Girls are forced to drop out of school after primary education since many villages have no high schools. Parents are not willing to send their daughters to high schools in other areas for fear of their security. They rather prefer to marry off their daughters at an early age thus promoting the evil of child marriages,” she noted while citing many such cases in areas surrounding her village.

“You will become untouchable in society if you are once raped,” she said quoting the frequent reminders by their parents.

“It is important to give voice to these voiceless people. This can be done if the political parties include key children’s issues in their election manifesto,” said Prof S.N. Choudhury, head of the department of sociology, Barkhatullah University here,

“Children do not get priority in the model of modern economy which merely focuses on high economic growth,” said social activist Mr Jain, seeking a change.
“The consequence is that we have a society today which is witnessing the horrible incidents of six children being kidnapped and four children raped every hour,” he observed.