MK Stalin was elected as the DMK president unopposed at the party''s general council meeting held in Chennai today. 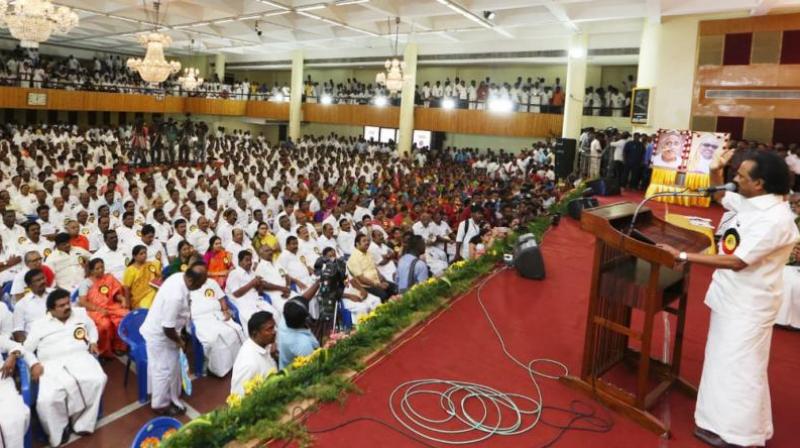 MK Stalin has been elevated as DMK president, a post which has been lying vacant since the demise of M Karunanidhi, at the party’s General Council meeting. (Photo: File | PTI)

Chennai: Soon after his elevation as DMK chief, MK Stalin expressed concern over the present political situation and said that the secular fabric of the country is under attack by authoritative and communal forces.

Addressing the DMK General Council meeting being held in Chennai, Stalin said, "Today's political situation has come as a grave challenge. Education, art, literature, religion are under attack by authoritative and communal forces. The Union government is trying to destabilise judiciary and selection of governors. All this has dealt a blow to the secular principles".

Earlier during the meeting, Stalin was elected as DMK president, a post which has been lying vacant since the demise of M Karunanidhi.

All along considered the political heir apparent of his father, Stalin was elected unopposed as he was the sole candidate in the fray at the close of nomination Monday evening.

Chants hailing Stalin as "Thalapathy" (Commander) rented the Kalaignar Arangam where the meeting was underway even as the General Council members cheered with loud applause.

Stalin, who has been handling the party since the run-up to the Tamil Nadu Assembly Elections in 2016, was appointed ‘working president’ of the party in 2017.

The 65-year-old leader had filed his nomination papers at Anna Arivalayam, the party headquarters, in Chennai on Sunday.

Senior DMK leader Durai Murugan has been elected as the party treasurer, previously held by Stalin.

Stalin's elevation comes amid threats by his brother and expelled DMK leader M K Alagiri who hardened his stance saying he will continue with the proposed September 5 march and warned the party of consequences if he was not readmitted.

The former DMK strongman in southern Tamil Nadu, who has been flexing muscles since the death of his father Karunanidhi on August 7, said the rally in Chennai was being organised as per the wishes of the cadres.

"They (cadres) only wanted me to take the lead in organising the march to pay homage (to Karunanidhi)," he told reporters. He said he was doing all this to "save" the DMK following the demise of Karunanidhi.

"Kalaingar (Karunanidhi) is not there now. The party has to be saved and protected," Alagiri said. "If they don't readmit me, they will have to face consequences," he added.

Indicating a fresh succession war in the DMK, Alagiri had on August 13 claimed that all "loyal" party workers were with him and accused Stalin of blocking his return to the party. The DMK, however, has brushed aside Alagiri's claims and rallied behind Stalin.

On whether any DMK leader would participate in the march, Alagiri said, "I don't want to answer questions based on presumptions."

On Saturday, he had said his strength would be known during the rally. "You will know how the party men accept me and want me there (in the party)," he had said.