India   All India  28 Aug 2018  Uttar Pradesh BJP in dilemma over quota in promotions
India, All India

Uttar Pradesh BJP in dilemma over quota in promotions 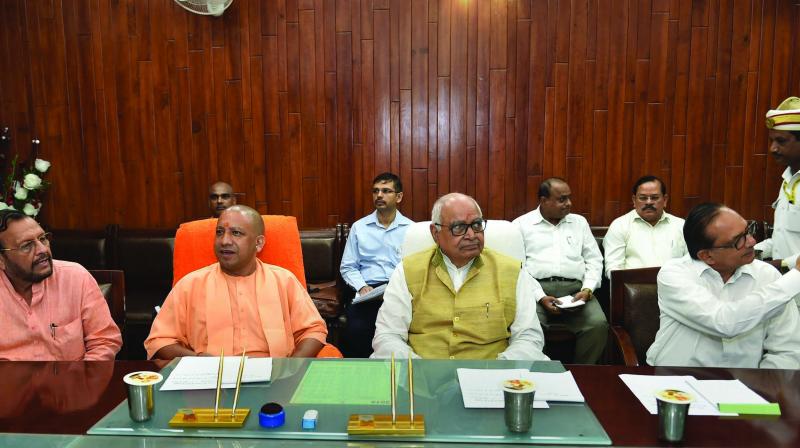 Uttar Pradesh chief minister Yogi Adityanath is playing a wait-and-watch game over the thorny issue of allowing reservation in promotions of government employees.

Lucknow: In an attempt to please all sections of society for electoral gains, the ruling BJP in Uttar Pradesh has ended up tying itself in knots.

The party is facing a piquant situation over the issue of reservation in promotion which is threatening to become a major poll issue. Over 18 lakh government employees in Uttar Pradesh are sharply divided on this issue which could end up as a spoiler for the BJP in the 2019 Lok Sabha polls.

Employees’ associations are rallying in favour or against the quota in promotion for dalits. But the Supreme Court having allowed the Centre to “go ahead with reservation in promotion in accordance with law”, the BJP cannot retrace its steps if it wants dalit votes.

BSP president Mayawati has already started accusing the Centre of delaying the implementation of the issue and said that the NDA is working with a casteist mindset.

She pointed out that while the BJP leaders were happily invoking Dr B.R. Ambedkar to get dalit votes, when it came to clearing the bill in Parliament they allowed it to remain pending. “They are not concerned about dalit welfare,” she alleged.

Interestingly, even the Samajwadi Party has welcomed the Supreme Court decision on quota in promotions and the party is apparently eyeing a section of dalit votes.

Political observes said that the BJP hopes to let the issue remain on the table for the time being so that ruffled feathers can be smoothened.

However, parties like the BSP are unlikely not let the sleeping dogs lie and will use the issue to target the BJP in the upcoming elections and generate support for themselves. 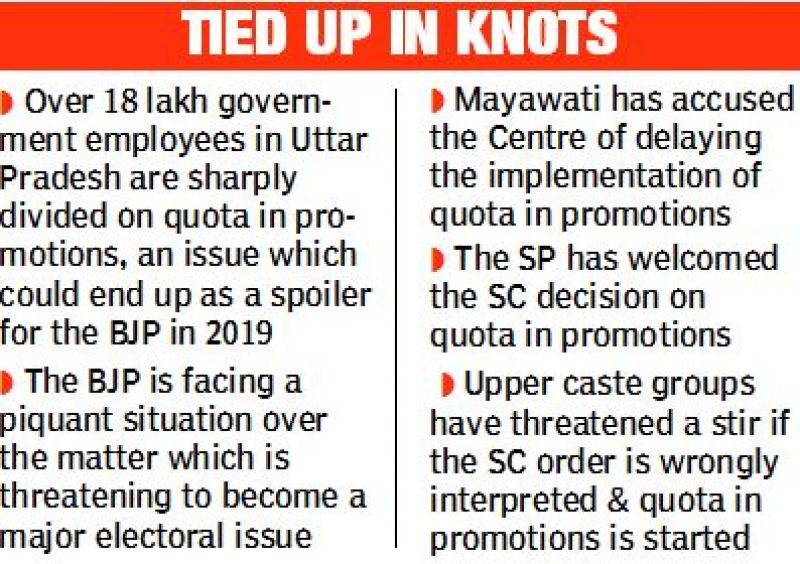 The Congress, on the other hand, has maintained a studied silence on the issue and is hopeful of winning over upper castes if the BJP does go ahead and implement the quota in promotion policy.

The Sarvjan Hitya Sanrakshan Samiti is vehemently opposed to quota in promotion. The Samiti is backed by upper caste employees.

Its president Shailendra Dubey said, “We will start a nationwide agitation on this issue if the SC order is wrongly interpreted. You cannot give the benefit of one policy to a person twice — once, when he gets a job and, then, for promotion too. It is grossly unfair to upper castes.”

Pro-reservation Arakshan Bachao Samiti’s convener Avadesh Varma, on the other hand, said that if the government continues to delay the implementation of the quota in promotion, they will bring the government to a standstill.

It may be recalled that a number of dalit employees who had been promoted on this basis in the Mayawati regime were promptly demoted by the subsequent Samajwadi Party government, causing considerable heartburn in the administration.

The hardening of stand on both sides, meanwhile, has put the BJP in a quandary. While the party is keen to win over OBCs and dalits for the Lok Sabha elections, it cannot afford to lose out on upper caste support that has been the mainstay of the party all these years.

Voices of dissent have already started emanating from the BJP. BJP MLA Surendra Singh said that this law would lead to victimisation of upper castes all over.

“The situation is rather uneasy for us. We genuinely want to ensure the benefit of dalits but in the bargain, we are also being unfair to upper castes - rather middle classes who will be directly impacted by this policy. We are trying to find a way out but it is difficult to move ahead without upsetting one class,” admitted a BJP functionary.