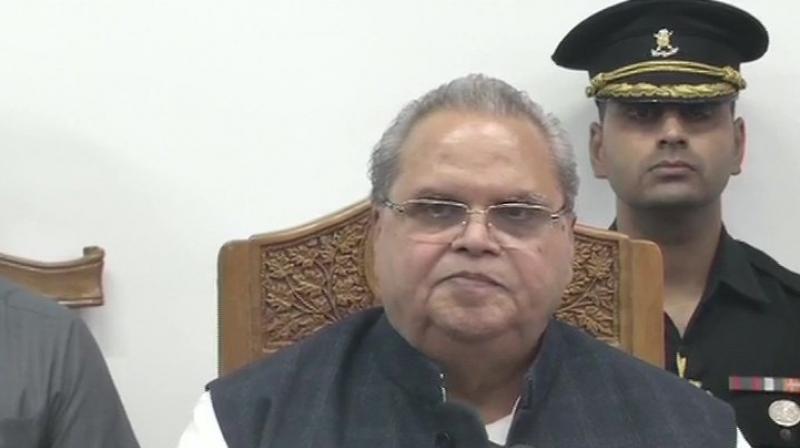 Srinagar: Jammu and Kashmir Governor Satya Pal Malik, on Wednesday, briefed the media about the status quo in the region.

Emphasising that the administration is concerned about every life, Malik said, "Every Kashmiri life is valuable to us, we don't want a loss of even a single life. There has been no civilian casualty, only the few who got violent are injured, they also have below the waist injuries."

The governor said that the strict restrictions after the abrogation of Article 370 abrogation were placed to prevent civilian causalities.

He stated that few incidents of clashes were reported between the protestors and security forces and utmost care was taken to avoid injuries.

The governor said that identity and culture of the people of Jammu and Kashmir will be preserved.

Talking about the network connectivity which has been suspended in the valley, Malik said, "We are opening mobile phone connectivity in Kupwara and Handwara districts(of Kashmir), soon we will open connectivity in other districts as well."

"The medium of phone and internet is used less by us and mostly by terrorists and Pakistanis as well as for mobilisation & indoctrination. It is a kind of weapon used against us, so we have stopped it. The services will be resumed gradually," Malik added.

He also said that the government is planning major investments in the region in the next six months which will boost development.

The government is aiming to generate 50,000 jobs for youth in Jammu and Kashmir in the next 2-3 months.

"We announce 50,000 jobs in Jammu and Kashmir administration, we will appeal to the youth to get involved with full vigour, in coming 2-3 months we will fill these positions," Malik said.

He said that the administration would endeavor to have a skill development centre in every district.

When asked about the detention of political leadership of Kashmir, Malik said, "Don't be sad about their detention. It will help them in their political careers."