The Congress leader demanded the arrest of officers involved in the alleged incident. 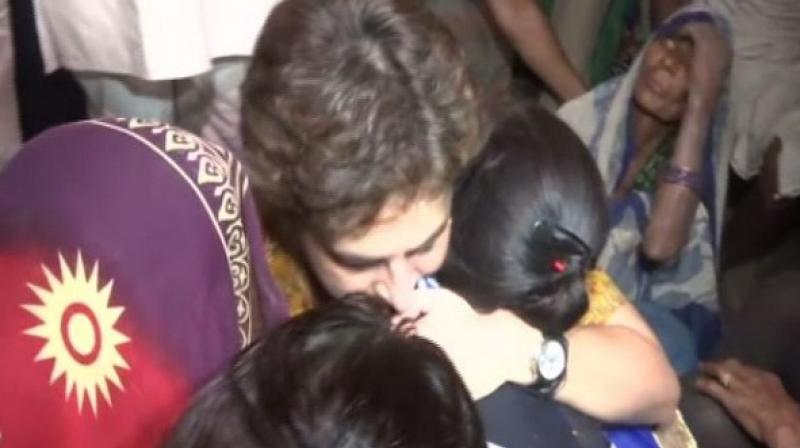 Priyanka interacted with the family of the victims here and was seen consoling them."There is complete anarchy in the entire state. Police are beating the people. The situation has become very bad," she said. (Photo: ANI)

Amethi: Congress general secretary for Eastern Uttar Pradesh, Priyanka Gandhi on Tuesday visited the residence of Ram Avtar who allegedly lost his life due to police torture and demanded the arrest of officers involved in the incident.

Priyanka interacted with the family of the victims here and was seen consoling them.

During her interaction, a local Congress leader told Priyanka if she permits, they will do a "dharna-pradarshan". The Congress general secretary replied - please do (bilkul kariye).

The Congress leader demanded the arrest of officers involved in the alleged incident. "They took this boy and kept him for four days, beat him up and killed him. After that, they took his father to the hospital. The officers involved should at least be arrested," she said here.

Ram Avtar, detained on theft charges was found dead four days after his arrest by the UP Police. Avtar, was allegedly found dead under mysterious circumstances in police custody on Sunday.

Family members of the deceased alleged that the police have beaten him to death.

"The police caught him four days ago and he was beaten mercilessly by the police," the victim's mother had said.

"We received a call from the police saying they were taking him to hospital. They did not tell us the reason. When we reached the hospital, we found him dead," another family member said.

Police had said that two policemen have been suspended and a magisterial inquiry has been ordered in the case.

"The deceased Ram Avtar was found dead in police custody under mysterious circumstances. Two policemen have been suspended. The body has been sent for post-mortem. Accordingly, strict action will be taken once the cause of death is ascertained," Amethi SP Khyati Garg had said talking about the incident.