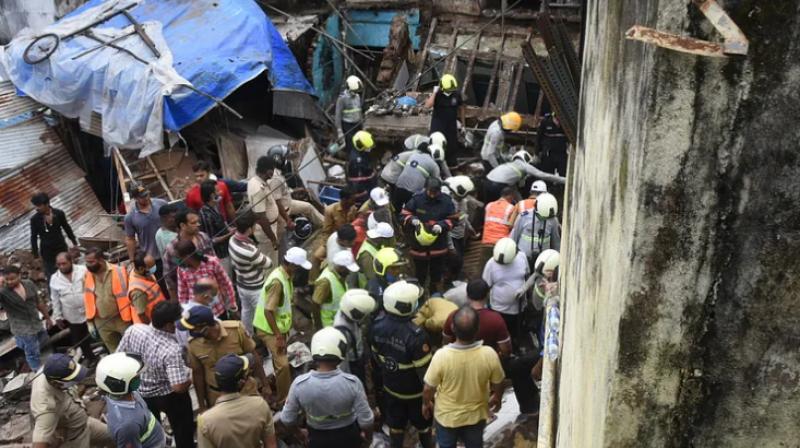 At least two died and two persons are feared trapped after a portion of a three-storey building in Nagpada area of South Mumbai collapsed. (Photo- Twitter)

Mumbai: At least two died and two persons are feared trapped after a portion of a three-storey building in Nagpada area of South Mumbai collapsed on Thursday. The incident occurred around 1 pm. Maharashtra Housing Minister said that action will be taken against the builder who was appointed for redevelopment of the building.

A girl identified as Aliya Riyasat Kureshi, and a 70-year-old woman, Noor Kureshi, were rescued from under the rubble. They were rushed to the JJ Hospital, where they were declared dead. Five fire engines, a quick response vehicle with local police and ambulance were rushed to the spot. “The toilet block portion of Mishra building, an old structure, located on Shuklaji Street caved in,” an official of the Brihanmumbai Municipal Corporation (BMC) said.

According to sources, a builder was issued a NOC for redevelopment of Mishra building and adjacent Abdul Rehman building. Both the buildings comprised of 111 tenants as on date of the NOC.

A statement issued by Mumbai mayor Kishori Pednekar said, Mishra building comes under Maharashtra House and area development Authority (MHADA). The BMC had also declared it a dilapidated building and had served eviction notices to the residents. “MHADA should cancel the NOC given to the builder appointed for redevelopment if he delays the work,” said Ms Pednekar, who visited the spot after the incident.

State housing minister Jitendra Awhad said that MHADA had recently announced that residents of a dilapidated building can take decisions about redevelopment if the appointed builder delays the work. In such cases, after three years, MHADA will take over the work.