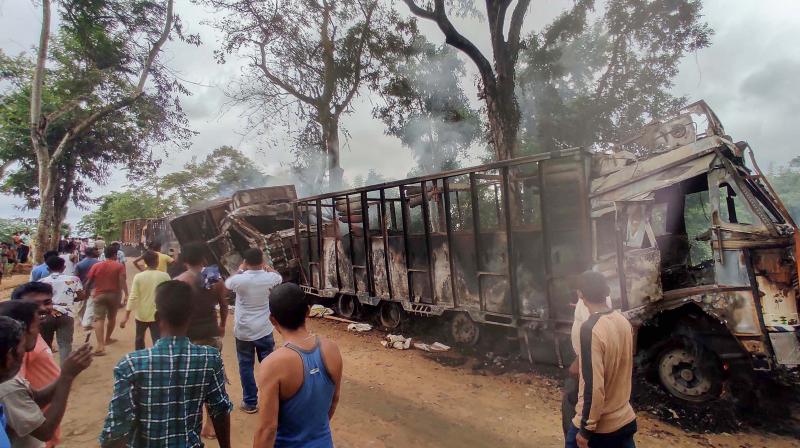 Local people look at trucks which were set on fire allegedly by members of the Dimasa National Liberation Army (DNLA) at Dayangmukh in Dima Hasao district of Assam, Friday, Aug. 27, 2021. (PTI Photo)

Guwahati: Five people were killed and one injured when suspected militants of the Dimasa National Liberation Army (DNLA) waylaid seven trucks, fired indiscriminately and set them on fire in Dima Hasao district of Assam on Thursday night.

The trucks, carrying industrial raw materials for a cement factory, were coming from Umrangsu in Meghalaya when the incident took place at around 8.30 pm at a place called Rangerbeel, about 200 km from here.

Dima Hasao superintendent of police Jayant Singh said: “The heavily armed rebel group fired at the vehicles for several minutes and then set them on fire. Five persons have died in the incident and one sustained injury. All of them are drivers and handymen of the trucks.”

Suspecting that the refusal of DNLA’s extortion demands by the cement factory could be the reason for the attack, security sources said that a fledgling militant outfit, Dimasa National Liberation Army (DNLA), allegedly backed by the NSCN (I-M) of Nagaland, was suspected to have been involved in the attack.

Formed in April 2019, DNLA seeks an independent nation for the Dimasa community through an armed struggle. In recent months, the outfit’s members have been killed in gunbattles with the security forces or have surrendered.
Dimasa is one of Assam’s indigenous tribes. Around 142,413 Dimasas are concentrated in Dima Hasao district, according to the 2011 census, while others live in neighbouring Nagaland.

The DNLA claims to be fighting to protect the tribe’s culture, language and restoring the Dimasa kingdom, one of the earliest in the region.