India   All India  28 Sep 2019  We never hesitate to take tough decisions, Article 370 is one such: Rajnath
India, All India

We never hesitate to take tough decisions, Article 370 is one such: Rajnath

Rajnath was speaking after commissioning the INS Khanderi submarine at the dockyard of the Mazgaon Dock Shipbuilders Limited, Mumbai. 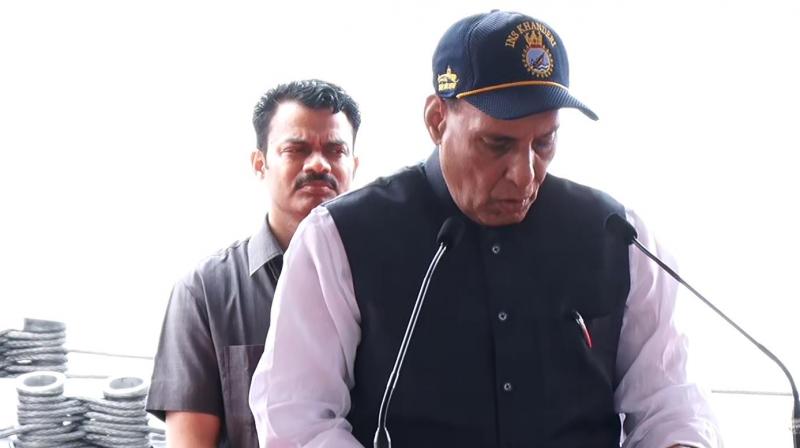 On the submarine's commissioning, Rajnath said, 'It is a matter of immense pride that India is one of the few countries which can build its own submarines.' (Photo: ANI)

Mumbai: State-sponsored terrorism is a big challenge and "our hostile neighbourhood" wants to destabilise India, Defence Minister Rajnath Singh said on Saturday at the launch of frigate INS Nilgiri here.

"We are moving forward, and our commercial interests are getting wider, and with this, our dangers are also getting bigger. We need to understand this reality," Singh said.

INS Nilgiri is the first of the Indian Navy's seven new stealth frigates with enhanced stealth features, weapons and sensors.

"Our hostile neighbourhood wants to destabilise us. State-sponsored terrorism is a big challenge. Our government is strong willed, and we do not hesitate when to comes to taking tough decisions. Abolition of Article 370 is one such decision," he said.

"We completely believe that it will lead to a new age of development in Jammu and Kashmir, and Ladakh," Singh said.

The Union territories of Jammu and Kashmir, and Ladakh will come into being from October 31.

Today, India belongs to an elite group of nations which are building their own aircraft carriers and strategic submarines.

Out of the total 51 ships and submarines on order at various shipyards, as on date, 49 are being constructed indigenously, the defence minister said. Singh also spoke on piracy on sea routes and asserted that the Navy is equipped to thwart such incidents.

''With 70 per cent of our trade by value and 95 per cent by volume taking place through the sea route, even a slight disruption of seaborne trade due to piracy, terrorism, or conflict, could have serious repercussions on the economic growth and well-being of our nation," the minister said.

"We are making concerted efforts to modernise the Navy and equip it with the best platforms, weapons and sensors," the minister said.

Today, the Indian Ocean region is the epicentre of activity and the entire world is watching India and see the Indian Navy as a "Net Security Provider", Singh said.

"With the growing stature of India in geo-political and geo-strategic dimensions ,and increasing reliance of our neighbours on us to provide credible security and peaceful and prosperous sea routes, our responsibility has taken a paradigm shift," he said.

Singh expressed confidence that INS Nilgiri and the other six ships of the project will proudly fly the Indian Flag across oceans.

These will prove to be worthy ambassadors of the country, showcasing India's shipbuilding prowess and spreading India's message of peace and strength across the globe, the defence minister said.