The death toll due to the viral disease climbed to 4,47,373 with 179 more fatalities 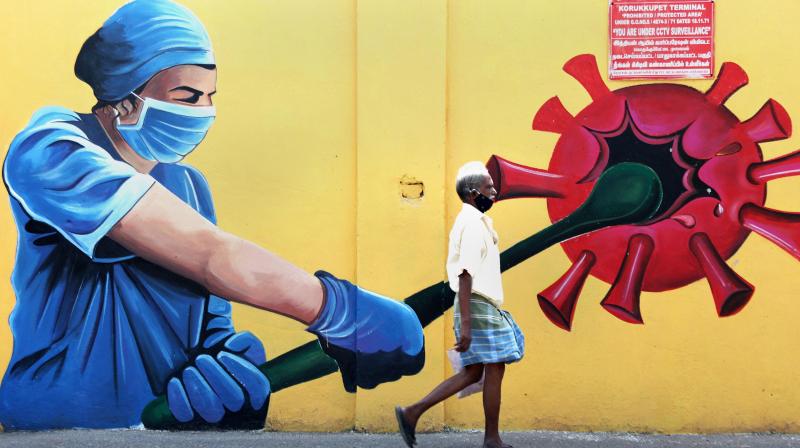 People walk past a wall mural on COVID awareness in Chennai. (Photo: PTI)

A total 18,795 fresh Covid cases were registered in a span of 24 hours, while the death toll due to the viral disease climbed to 4,47,373 with 179 more fatalities, the lowest in 193 days, according to the ministry's data updated at 8 am.

The number of daily fatalities was recorded at 154 on March 19.

The number of active cases has declined to 2,92,206, accounting for 0.87 per cent of the total number of cases -- the lowest since March 2020 -- while the national COVID-19 recovery rate was recorded at 97.81 per cent, the highest since March last year, the ministry said.

Less than 50,000 daily cases are being reported in the country for 93 consecutive days now, the ministry said.

The daily positivity rate was recorded at 1.42 per cent. It has been less than three per cent for the last 29 days.

The weekly positivity rate was recorded at 1.88 per cent. It has been below three per cent for the last 95 days, according to the ministry.

The number of people who have recuperated from the disease has gone up to 3,29,58,002, while the case fatality rate was recorded at 1.33 per cent.

The country crossed the grim milestone of two crore Covid cases on May 4 this year and the three-crore mark on June 23.

The 179 new fatalities include 58 from Kerala and 32 from Maharashtra.

"Our figures are being reconciled with the Indian Council of Medical Research," the ministry said on its website, adding that a state-wise distribution of the figures is subject to further verification and reconciliation.