India   All India  28 Oct 2018  Centre working to change views of it being ‘anti-Muslim’: BJP leader
India, All India

Centre working to change views of it being ‘anti-Muslim’: BJP leader 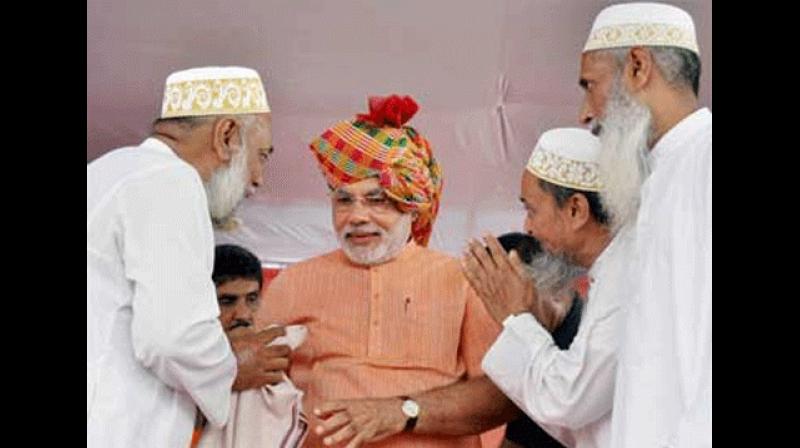 'Both PM Modi and Amit Shah have condemned lynching. You can't count on statements made by people, who are either not related to party or are remotely related to it,' Ansari said. (Photo: File)

Kolkata: BJP Minority Morcha national president Abdul Rasheed Ansari has said the party's government at the Centre is walking the "extra mile" to gain the confidence of minorities and has been successful in changing the perception of it being "anti-Muslim" to a large extent.

The opposition, he alleged, had launched a "fear-mongering campaign" among minorities against the BJP.

The BJP-led NDA government has brought in development without any discrimination but the opposition has set a "separate yardstick" for the party when it came to dealing with minorities.

"Political parties (opposition) have targeted us (BJP) in order to isolate us from the minorities. They had used a fear-mongering campaign among minorities in an attempt to eat into the BJP's vote-bank. This has been going on for several years. But things have changed of late and you will find the party increasing its base among minorities in various parts of the country," Ansari told news agency PTI in an interview.

Minorities and backward classes, for the first time, have realised that the BJP, unlike other parties, "delivers rather than making false promises", he said.

Talking about the recent incidents of lynching in the country, Ansari said the BJP leadership had spoken out against them and action has been taken against culprits. "You have to look at the intention of the government and the party. Both Prime Minister Narendra Modi and party president Amit Shah have condemned them (lynching). You cannot count on statements made by people, who are either not related to the party or are remotely related to it," he said.

About the incident where Union minister Jayanta Sinha felicitated eight people accused of lynching in Jharkhand, earlier this year, Ansari contended that the gesture was not appreciated by anyone in the saffron party.

"Has anybody appreciated Jayanta Sinha for felicitating them? It is not expected that Amit Shah ji or the Prime Minister will speak out on a regular basis on every single incident that is happening in the country," he said.

Asked about poor representation of Muslims in the distribution of tickets by the BJP, he said, "The issue should not be seen through the prism of religion. Tickets are not given in our party on the basis of religion. It is given on the basis of eligibility and capability of an individual".

Ansari was also quick to point out that the BJP had given tickets to an "overwhelming number" of Muslim candidates in the West Bengal panchayat polls. "About 850 Muslims were given BJP tickets in the three-tier rural polls in the state held in May. It only goes on to show how much we care about the community," he asserted.

Criticising the erstwhile Congress government for not doing enough for the development of the community in the country, he said the BJP government has increased the budget for minorities by "leaps and bounds".

"Since Independence, there has been a huge gap between what was promised to the minorities and what was actually delivered. But we are serious about the development of Muslims as we believe in the policy of 'Sabka Sath, Sabka Vikas'”, he said.

"If you go through the history of our country of the last 60 years, you will see how many large-scale communal riots took place during the Congress regime ... But now you won't witness such a situation in the country," Ansari added.