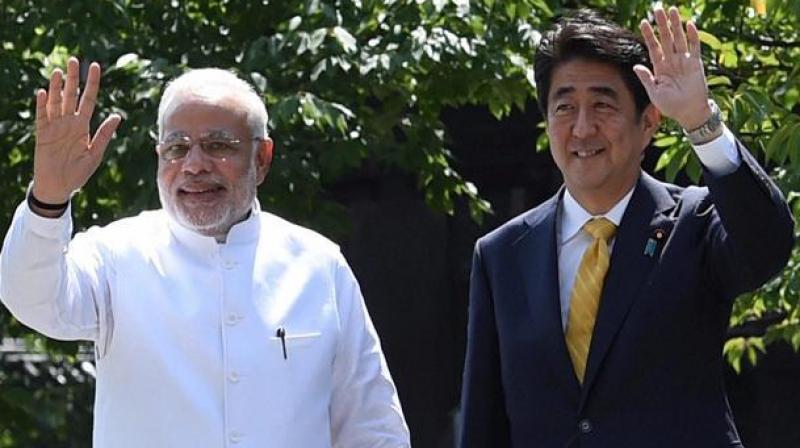 Japanese PM Shinzo Abe will host PM Modi at his holiday home in the picturesque Yamanashi prefecture for a private dinner on Sunday. (Photo: File | PTI)

Tokyo/New Delhi: Prime Minister Narendra Modi on Saturday said his meeting with Japanese counterpart Shinzo Abe will add new vigour to the strong friendship between the two countries as he arrived in Tokyo to attend the 13th India-Japan annual summit.

The two-day summit beginning on Sunday will seek to review the progress in ties and deepen strategic dimension of the bilateral relationship.

"PM Narendra Modi arrives in Tokyo to a warm welcome for his 5th Annual Summit with Abe Shinzo. Japan is one of the few countries that India has this mechanism of annual summits, reflecting the extraordinary depth of our engagement," External Affairs Ministry Spokesperson Raveesh Kumar tweeted.

"Landed in Tokyo. I am confident this visit will add new vigour to the strong friendship between India and Japan," PM Modi said in a tweet.

In a statement on Friday, before leaving for Japan, the Prime Minister described India and Japan as a "winning combination" and said the island nation was New Delhi's most trusted partner in its economic and technological modernisation. PM Modi said it will be his 12th meeting with Abe since he first visited Japan as prime minister in September 2014.

During the summit, Prime Minister Narendra Modi will engage with Abe on a range of issues including defence and regional security.

Abe will host PM Modi at his holiday home in the picturesque Yamanashi prefecture for a private dinner on Sunday following which both the leaders will travel to Tokyo by train. Yamanashi, at a distance of around 110 kilometres from Tokyo, is surrounded by several mountains including Mount Fuji - the country's tallest peak at around 3,776 metres.

On Sunday afternoon, the Prime Minister will join his Japanese counterpart for an informal lunch at a hotel. The two leaders will then visit a company which is a leading manufacturer of factory automation.

Besides bilateral issues, the two leaders are expected to deliberate on a range of regional and global issues including the situation in the Indo-Pacific region. It is said the Prime Minister's visit will reaffirm the traditional bonds of friendship between the two countries and strengthen their multi-faceted cooperation in diverse fields.

India is also hoping to have some kind of synergy or integration between PM Modi's Ayushman Bharat scheme, which is the largest medicare programme of its kind globally, and the Japanese programme which is called Asia Health and Wellbeing Initiative.

Prime Minister in his statement said projects such as Mumbai-Ahmedabad High Speed Rail and Dedicated Freight Corridors reflected the high level and "strength of our economic engagement".

"Japan is also at the forefront of engaging in our national initiatives, such as 'Make in India', 'Skill India', 'Digital India', 'Start Up India'... Japanese investors have faith in India's economic future, which is marked with myriad opportunities," PM Modi said.

PM Modi will also address the Indian community function in Tokyo and will attend a series of business events and address the business forum.