In a packed visit to Delhi, the TDP chief also pitched himself as a ‘facilitator’ in helping evolve a credible alternative to the NDA. 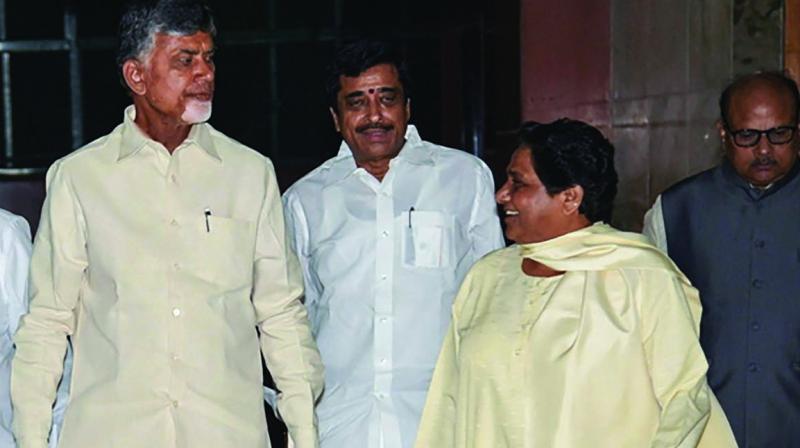 New Delhi: Stepping up efforts to stitch together an anti-BJP front ahead of 2019, Andhra Pradesh chief minister N. Chandrababu Naidu on Saturday met BSP chief Mayawati and an array of political leaders in the national capital and clearly indicated that a stable Opposition dispensation will have to include the Congress. The TDP chief expressed confidence that “political compulsions” will bring together all non-BJP parties to fight the NDA.

In a packed visit to Delhi, the TDP chief also pitched himself as a “facilitator” in helping evolve a credible alternative to the NDA.

Addressing a press conference, Mr Naidu stressed on the need to take everybody along to “save the nation”.

“It is only (because of) political compulsion and in the overall interest of the nation, parties will join together. Some may not join before elections, some of them may join after elections,” he said.

“So without a national party you cannot form a government at the Centre. How to form a government? We have to give confidence to the people now. All of us have to join together, those who are interested in the nation,” he said. The TDP chief, who has earlier played the role of a convenor in the Atal Behari Vajpayee-led NDA, said he was ready to do his “bit” for the country.

Mr Naidu also made his intention of playing a national role clear when he said that he considered it his duty to help bring together all parties to keep the Modi government out in 2019.

“ Democracy is in danger. Institutions have collapsed. I don’t want to comment on Rafale deal and the CBI. The ED and income-tax department are being used against politicians. Tomorrow, they will attack me also. I never indulged in petty politics,” he said.

Blaming the Modi government for putting pressure on political leaders including himself, he said, “In India there are political and ideological compulsions. In one nation, two political parties are facing each other and then they want to join at national level that is the problem. How to join together that is the problem. Many people might join us after elections also.”

The Andhra CM said that the TDP was the first regional party to move a no-confidence motion against the Modi government and get the support of all parties for that. “I have to play my role…my bit. I am a small man. I know that my province has only 25 LS seats. I want to work on how to save this great nation”.

Mr Kejriwal tweeted after his meeting with the TDP chief at the capital’s Andhra Pradesh Bhawan, “Had a good meeting with Chandrababu Naidu. Sharad Yadav was also present for a while. Discussed national issues. Present BJP government is a threat to the nation and to the Constitution. People across India will need to join hands to save India and the Constitution.”