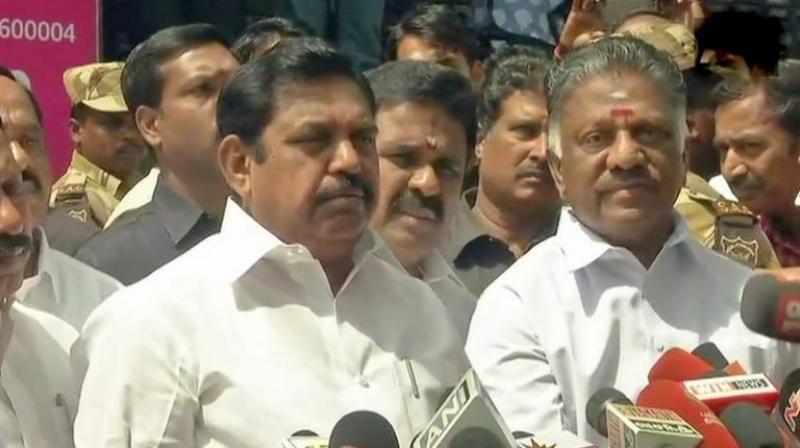 Chennai: After labelling them as betrayers, the AIADMK has extended an olive branch to its 18 disqualified MLAs, asking them to jump on to the ruling party bandwagon and flayed AMMK leader T T V Dhinakaran for "misleading" them.

Asking the debarred MLAs and other Dhinakaran loyalists who moved away from AIADMK to revert to the parent party, the top leadership on Saturday asked them to "understand the reality" of the Madras High Court judgement that upheld their disqualification.

The court's fair judgement has enthused party workers and the people of Tamil Nadu, the party said.

People were confident that the AIADMK government would continue to roll out welfare measures and "the angel of justice has paved a path for us to work together (again)" to meet the aspirations of the people, it said.

In an open letter to cadres, the top duo, refraining from naming Dhinakaran or his loyalists, including the 18 debarred MLAs, said party functionaries had chosen to travel in an "alternative path as a result of being misled and due to some bitterness."

Seeking to assuage feathers ruffled by the legal wrangle, the Chief Minister and his deputy quoted a Tamil proverb which says love does not erode, despite quarrels or fights and added that all of them were "children of one mother, bonded by brotherhood and love."

When party workers ignored differences and worked together, the AIADMK would grow manifold and vanquish its political rivals, they said.

Both the party and the power of governance were only tools to serve the people and "none of us have a thought of working for posts. Our only goal is to serve the people. Since the court ruling helps us achieve our goal, we welcome and celebrate it."

Palanisamy, speaking to reporters at Coimbatore earlier on Saturday had said that (without naming the disqualified MLAs) 'betrayers' and 'enemies' had been given a befitting lesson by the Madras High Court.

A key Dhinakaran loyalist and one of the disqualified MLAs, P Vetrivel, ruled out considering going back to the ruling camp. He told news agency PTI that they would retrieve the AIADMK by going to the people and facing the polls.