The day is observed every year on Oct 27, coinciding with the arrival of the first batch of Indian troops in Srinagar on this day in 1947 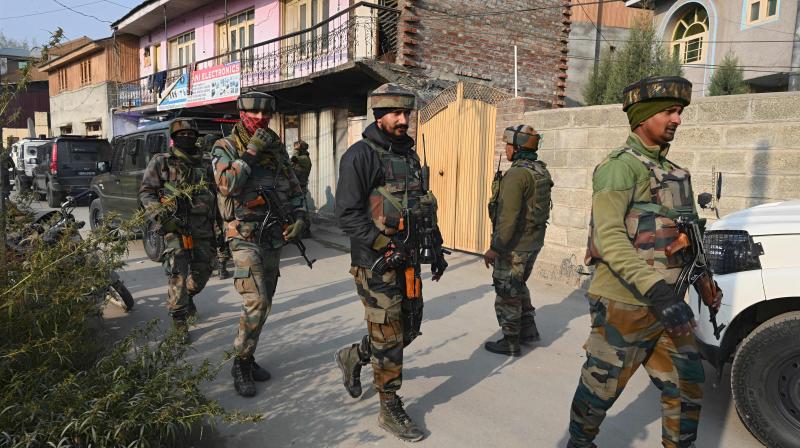 Indian army soldiers are seen near the site of a gunbattle between suspected militants and government security forces at Moachwah in Chadoora area of Budgam district on the outskirts of Srinagar on October 28, 2020. (AFP)

Srinagar: On Infantry Day, the Army renewed its appeal to the Kashmir youth to shun guns and pursue education and various career opportunities available in the Union Territory and rest of the country.

Lt. Gen. B.S. Raju, the commander of Srinagar-based 15 Corps (also known as Chinar Corps), said, “The situation has improved considerably in Kashmir. The young ones here should seize it and focus on studies. Others should work hard and pursue better career opportunities and not choose the wrong path.”

He also said that the local youth who pick up arms and shoot video to circulate these through social media were not terrorists. Appealing them to shun the path of violence, he said they can still come back and rejoin their families as peaceful citizens.

“I have a message for the newly recruited militants that posing for a photograph- holding a gun in hands and releasing a video won’t make you a terrorist. You can still come back and join your families. There has been progress in this direction recently and we are hopeful of more positive on this front,” he told reporters on the sidelines of a function held in Srinagar’s Badami Bagh Cantonment to mark the Infantry Day.

The Army celebrated 73rd Infantry Day at various locations across J&K including Northern Command headquarters in garrison town of Udhampur and Srinagar-based Chinar Corps command centre and pledged to take its ‘fight against the militancy and terrorism’ in the State to its “logical conclusion” and also defend the country’s borders with China and Pakistan with more zeal.

The day is observed every year on October 27, coinciding with the arrival of the first batch of Indian troops in Srinagar on this day in 1947.

Lt. Gen. Raju congratulated the Infantry jawans deployed in tough terrains and hinterlands and said, “They can reach where no one does.”

Elaborating on his appeal to the Kashmiri militants to shun the gun, he said that recently four militants surrendered before the security forces during their counterinsurgency operations and that more are likely to follow the suit. “We’re ready to receive the gun-wielding youth back,” he said and reiterated that those Kashmiri youth who have completed their studies could now work on finding opportunities in entrepreneurship and others should try for government jobs or starting their own ventures.

The Infantry, the largest component and the premier fighting arm of the Indian Army,  is also known as the ‘Queen of the Battle’. Talking on the importance of the Infantry Day, the Corps commander said, “Infantry is playing a great role in every battle. I want to put it on record that we are able to take any kind of task.”

A defence spokesman here said that the day’s celebrations at the headquarters of the Srinagar-based 15 Corps began with a solemn wreath laying ceremony in which Lt. Gen. Raju and all ranks paid tribute to the martyrs at War Memorial.

In Leh, the GOC of the Fire & Fury Corps laid the wreath at the memorial of the slain soldiers and paid homage to them in a solemn ceremony organised at the Hall of Fame. Elsewhere in J&K and Ladakh, the day was celebrated with “great enthusiasm and gaiety”, the Army said. End it