Aryan Khan, 2 others get bail; may be out of jail today or Saturday

The sessions court registry will verify the surety and after completing all the procedures, the NDPS court will issue the release orders 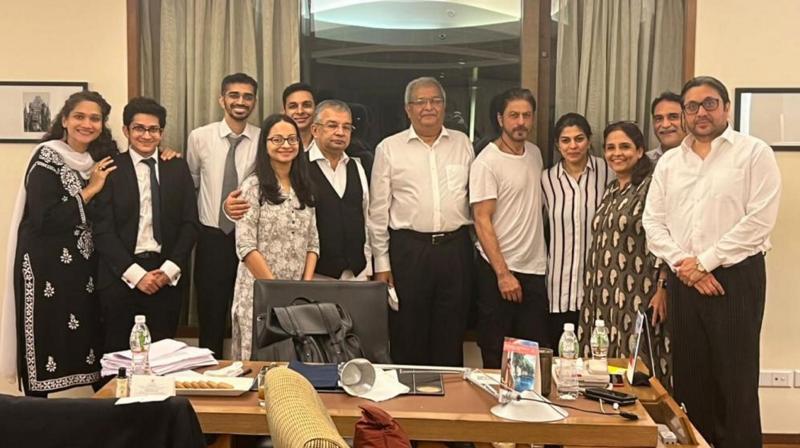 Mumbai: The Bombay high court on Thursday granted bail to Bollywood superstar Shah Rukh Khan’s son Aryan Khan, his friend Arbaaz Merchant and co-accused Munmun Dhamecha in the cruise ship drug bust case. Aryan and the others, who were arrested on October 3, have spent 25 days in custody.

After hearing arguments from senior advocates Mukul Rohatgi for Aryan Khan, advocate Amit Desai for Arbaaz Merchant, advocate Kashif Ali Deshmukh for Munmun Dhamecha and ASG Anil Singh for the Narcotics Control Bureau, Justice Nitin Sambre said: “All three pleas are allowed. I will pass detailed orders by tomorrow evening.” Due to paucity of time, the judge neither passed a detailed order nor an operative order and said the order copy will be provided on Friday.

Mr Rohatgi had requested the court to grant provisional cash bail and that the sureties would be provided later, but Justice Sambre refused and said the sureties have to be provided.

It is learnt that Aryan and the others will be released from the jail at the earliest by Friday, but if the formalities are not completed by evening, it could be delayed till Saturday.

After Justice Sambre signs the detailed order on Friday, it will be sent back to the special NDPS court which had earlier rejected Aryan Khan’s bail application. The sessions court registry will verify the surety and after completing all the procedures, the NDPS court will issue the release orders, which will be taken to Mumbai’s Arthur Road Jail where Aryan Khan, Arbaaz Merchant and Munmun Dhamecha are lodged.

If the release order is submitted to the jail authorities before 5.30 pm, Aryan Khan and the others will walk out of jail the same day, otherwise they will have to wait till the next day.

While opposing Aryan’s bail, additional solicitor-general Anil Singh had reiterated this was a case of a larger conspiracy. Alleging that Aryan has international links, Mr Singh argued that the NCB needed more custody for further interrogation. The NCB further alleged that Aryan was an influential person and attempts had already been made to influence the witnesses and tamper with evidence. The ASG told the high court on Thursday that the case against the accused was not for consumption but for “conscious possession and plan to consume”. In this regard, the ASG highlighted Section 29 of the NDPS Act, which deals with conspiracy.

Mr Singh highlighted the WhatsApp chats of Khan and said that the subsequent recovery of drugs from eight co-accused corroborated what was stated in the WhatsApp chats. “It cannot be a coincidence that so many people on the cruise, eight were found with drugs and there were multiple varieties of drugs,” the ASG claimed.

It was also argued while no contraband was found from Aryan, charas was found from his friend Arbaaz, both were together and the drug was for the consumption of both persons. Aryan knew Arbaaz had drugs for both and hence Aryan was also in conscious possession of the drugs, the agency went on to claim.

The ASG had also argued that as per the investigation so far, Aryan was not a first-time user of drugs, and claimed he had been consuming drugs for the last two years.

Mr Rohatgi had argued this was a clear case of no possession, no consumption and no recovery of drugs. The chats found on Aryan’s mobile phone had no connection with the cruise ship party, he said.

On the question of “conscious possession and conspiracy”, as alleged by the prosecution, Mr Rohatgi argued there was no conspiracy as there was no “meeting of minds”, there was no discussion that they would get the substance and smoke. “That is a conspiracy,” he said.

Mr Rohatgi contended that the only person Aryan knew was Arbaaz Merchant. “I knew only Arbaaz. I did not know anyone else. It is true that it is difficult to prove common meeting of mind. But facts cannot be ignored. There has to be a meeting of minds,” he argued, countering the conspiracy charge.

It was claimed by the NCB that Aachit Kumar was a drug dealer and he was arrested on the basis of Aryan’s statement. However, Mr Rohatgi pointed out that only 2.4 grams of contraband was claimed to have been found from Mr Kumar. He argued that dealers cannot have such a small quantity. He submitted that in light of the Supreme Court’s ruling last year that statements given to NCB officials were inadmissible as evidence in court, Aryan should be granted bail.

Senior lawyer Amit Desai for Arbaaz Merchant argued that at the time of arrest, there was no word about the conspiracy and there was a clear understanding that it was a case of personal consumption, nothing more than that. According to him, the offences alleged against the accused are punishable with less than one year, and in cases of small quantities bail should be granted as per the apex court guidelines in the Arnesh Kumar judgment.

Allowing the bail pleas, Justice Sambre said he will keep the matter on Friday for the bail conditions. The court is also likely to give a detailed order with reasoning on the same day.