The issue of her marriage with Mr Jahan, annulled by Kerala high court in May, will be decided by the apex court in January. 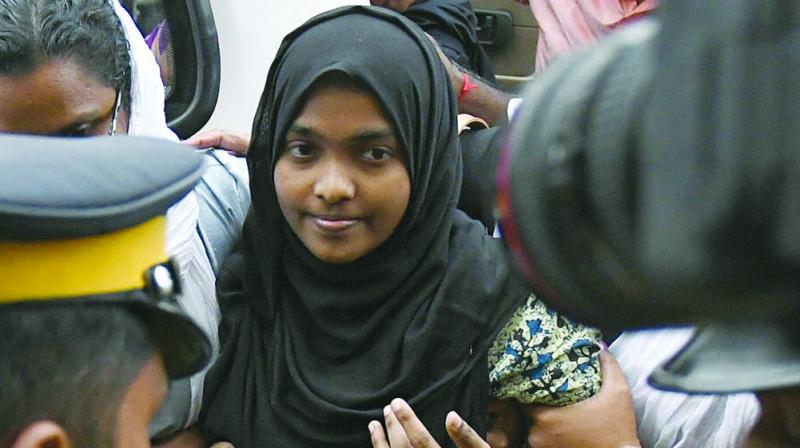 When the CJI suggested that the Tamil Nadu government would bear the expenses of her studies, Ms Hadiya told the court that she wanted her husband to meet the expenses and not the State. (Photo: Asian Age)

New Delhi: After dramatic scenes in the Supreme Court, Kerala’s Hadiya aka Akhila, the key dramatis personae in the alleged “love jihad” case, walked free after 11 months’ confinement in her parental home. Her release followed  her impassioned appeal to the court to allow her to meet her Muslim husband Shafin Jahan. “I want freedom…, I want to remain true to my faith,” she said.

The issue of her marriage with Mr Jahan, annulled by Kerala high court in May, will be decided by the apex court in January. Ms Hadiya’s lawyer claimed that she can now meet Mr Jahan at a college in Salem in Tamil Nadu where she has been told by the apex court to live till she completes her course in homeopathy.

After a two-hour-long hearing during which Ms Hadiya, 24, spoke in Malayalam, a bench headed by Chief Justice Dipak Misra sent her to Sivaraj Homoeopathy Medical College to enable her to pursue her studies and appointed college’s dean as her guardian.

When Ms Hadiya requested that her husband be made her guardian, Justice D.Y. Chandrachud, who was also in the bench, said, “No husband can be a guardian of his wife. At least I can’t say that I am the guardian for my wife.”

Ms Hadiya, expressing her desire to be independent and complete the course which she could not as she was confined to her father’s house in Kottayam, said, “I want to meet my husband. I want to complete my studies and want to live my life according to my faith and as a good citizen. I want my freedom. I have been in unlawful custody for the last 11 months.”

When the CJI suggested that the Tamil Nadu government would bear the expenses of her studies, Ms Hadiya told the court that she wanted her husband to meet the expenses and not the State.

While hearing the habeas corpus petition filed by Mr Jahan, the bench, which also included Justice A.M. Knawilkar, directed Kerala police to provide Ms Hadiya security and ensure that she went straight to the college from the court.

The hearing in the habeas corpus matter was also posted for hearing in January 2018.

Ms Hadiya and Mr Jahan’s marriage is being investigated by the National Investigation Agency (NIA) after her father alleged that she was one of many vulnerable young Hindu women being recruited by terror groups like ISIS through “love jihad” or marriage.

The NIA told the court earlier that the website through which Ms Hadiya and Mr Jahan married “is a sham” and forced conversion and terror recruitment was the motive behind the wedlock.

He said that the matter has acquired a strong communal colour on account of the involvement of a syndicate engaged in the conversion of women to Islam.

He produced the transcript of a voice clip featuring alleged ISIS recruiter Abdul Rasheed, in evidence of his association with the Popular Front of India, the Islamic fundamentalist organisation with which Mr Jahan is allegedly associated.

Mr Divan maintained that the purpose of the marriage was that the recruiter wanted one more member to pursue the target of indoctrination and conversion.

The NIA report should also be considered before the court decides to hear her views, Mr Divan said.

Additional solicitor-general Maninder Singh urged the court to go through the NIA’s findings, which had demonstrated that Ms Hadiya was radicalised and was not in a proper frame of find to take independent decisions.

This was strongly opposed by senior counsel Kapil Sibal and Indira Jaising, appearing for Mr Jahan, who argued that the purpose of the hearing was to ascertain whether she wanted to go free or not.

“Let her go wherever she wants but the court must speak to her and hear her views. Even if her marriage is a wrong decision, she is entitled to take a decision to go with him or not. There is no need to give communal colour to the whole issue,” said Mr Sibal.

Justice Chandrachud, referring to the ASG’s argument, said, “We need to examine whether the Stockholm syndrome (of praising the abductor who kidnaps a person) is true or not. We consider her individual autonomy, which has a cherished constitutional value. But can we ignore other issues, is the question before us?”

The CJI told Mr Sibal that the court needed to decide whether to examine Ms Hadiya before or after examining the materials placed before it.

However, both Mr Sibal and Ms Jaising insisted that the court should ask Ms Hadiya questions as she had been waiting for over 90 minutes to speak. Finally, the bench relented and ascertained Mr Hadiya’s views and decided to send her to the college in Salem.