'Made in India' robot Mitra greets Ivanka, Modi at GES 2017

Mitra announced the inauguration of the summit, after Modi and Ivanka pressed a button on the robot. 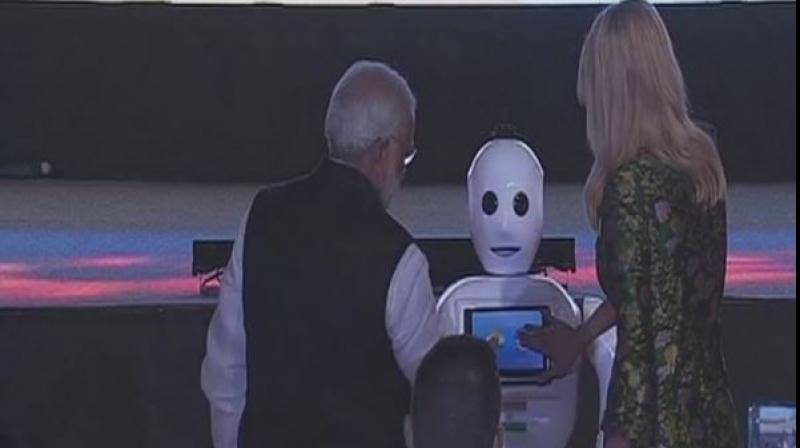 Two bots were deployed at the event, but it was Mitra that welcomed the PM and Ivanka Trump on the stage. (Photo: ANI/Twitter)

Hyderabad: At the Global Entrepreneurship Summit (GES) 2017 in Hyderabad on Tuesday, Prime Minister Narendra Modi and White House advisor Ivanka Trump were greeted by ‘Made in India’ robot, named Mitra.

Mitra, a robot manufactured by Bengaluru-based Invento Robotics, interacted with Modi and Ivanka at the summit.

CEO of Invento Robotics, Balaji Viswanathan, and his team of 14 members deployed two bots at the event, but it was Mitra that welcomed the Prime Minister and daughter of US President Donald Trump on the stage at the summit.

It was Mitra, who announced the inauguration of the summit, after Modi and Ivanka pressed a button on the robot.

A branch of Canara Bank in Bengaluru had been using the services of Mitra.

Ivanka is in India to attend the eighth edition of the Global Entrepreneurship Summit. Modi, who earlier on Tuesday launched the Hyderabad metro rail services, inaugurated the summit, a three-day event, at the Hyderabad International Convention Centre along with Ivanka.