'Not on record, don't discuss': Speaker on Pragya's Godse remark

The MP from Bhopal had triggered uproar during a discussion in the LS on Wednesday when she praised Mahatma Gandhi's assassin Godse. 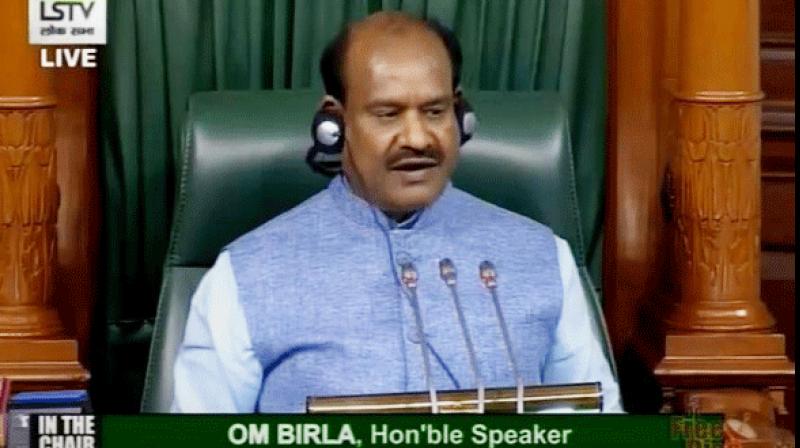 'What she (BJP MP Pragya Thakur) said has been expunged from the record. How can there be a debate if it is not on record?' said Om Birla. (Photo: File | ANI)

New Delhi: Lok Sabha Speaker Om Birla on Thursday exhorted that no debate will be held on the remark made by Bhopal BJP MP Pragya Singh Thakur on Mahatma Gandhi's assassin Nathuram Godse, as what she said was "expunged" from records.

"What she (BJP MP Pragya Thakur) said has been expunged from the record. How can there be a debate if it is not on record?" said Om Birla. The Speaker clarification came when Congress Legislative Party leader Adhir Ranjan Chowdhury raked the issue.

"Congress was called a terrorist party (by BJP MP Pragya Thakur), the party from which thousands of leaders made sacrifices for the freedom of the nation. What's happening? Will the House stay silent on this? Mahatma Gandhi's killer was called 'deshbhakt'," said Chowdhury.

The MP from Bhopal had triggered uproar during a discussion in the lower house on Wednesday when she interjected DMK leader A Raja's speech during a discussion on Special Protection Group (Amendment ) Bill and praised Mahatma Gandhi's assassin Nathuram Godse.

However, later on, she claimed that she was referring to Udham Singh. Speaker Om Birla expunged Thakur's remark from the record but opposition members protested outside the House.

Earlier this year, she described Godse as a 'patriot' and Prime Minister Narendra Modi had made it clear that such statements would not be tolerated by the party.