BJP holds grand rally in support of CAA in Assam

The Assam finance minister called upon the people to help accelerate the pace of development. 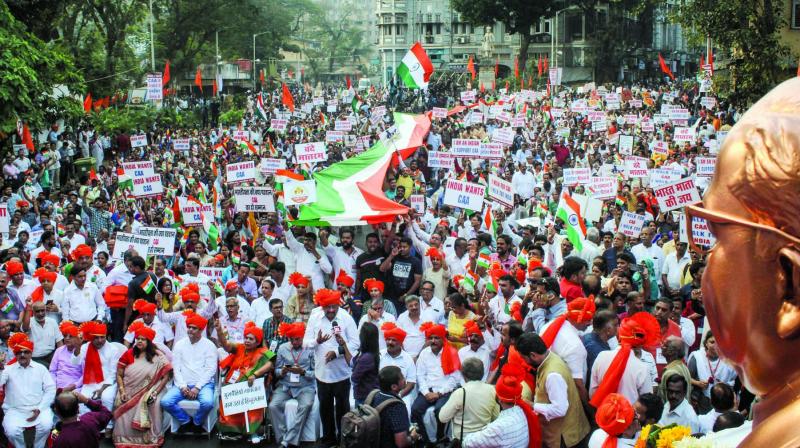 People take part in a rally in support of the Act. (Photo: PTI)

Guwahati: If the turnout at a public rally is any indicator, the ruling BJP Friday held an equally large public rally in support of the Citizenship Amendment Act (CAA) at Jagiroad in Upper Assam’s Morigaon district.

The nearly 4km long rally led by finance minister Himanta Biswa Sarma started from the Jagiroad College playground and ended at the Jagiroad Kahikuchi L.P. School. He led a similar rally in Nalbari where his opponents and anti-CAA leaders had accused the BJP of mobilising crowds from nearby districts.

Later, Assam chief minister Sarbananda Sonowal, who too attended the rally at Jagiroad, said that Assam is a land of peace. Assuring that its culture and indigenous identity will be maintained, the chief minister said that new heights of development will be achieved in the future.

While addressing “the peace and progress rally”, the Assam finance minister called upon the people to join them to accelerate the pace of development in the state. The rally was organised at Jagiroad where hundreds of employees of the Hindustan Paper Corporation Limited (HPCL) had been asked to vacate their quarters following the liquidation order of the NCLT.

In what came as a major relief to hundreds of employees of the paper mill, Mr Sarma in his address said, “We are with the people and will try to solve their problems. We will try to give paper mill employees some good news by tomorrow or the day after.”

It is significant that local MLA and minister of state health Pijush Hazarika also reiterated that some good news is coming soon for the employees of paper mills. He however refrained from going into further details.