'Why would such big leader know me': Prashant's response to Puri's 'I don't know him'

'Who is Prashant Kishor? I don't know him. There is a chap who used to work in UN, then he joined one party, then another,' Puri said. 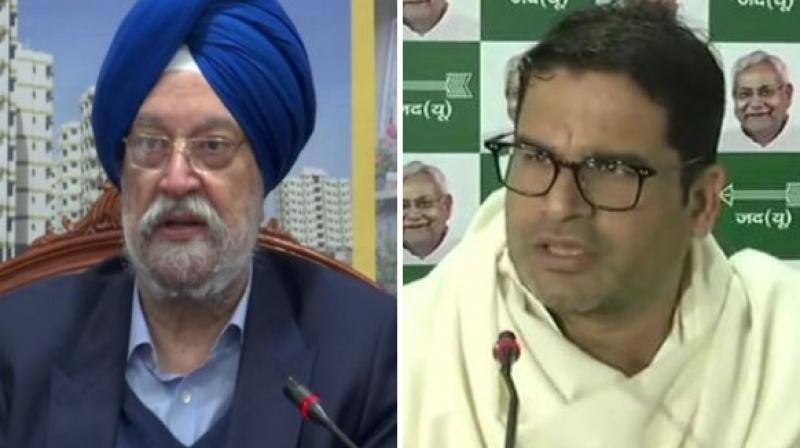 Kishore also added that he knows of Puri as it is important to be well versed with political adversaries. (Photo: ANI)

New Delhi: Prashant Kishor on Saturday gave a subtle but sharp response to BJP's Hardeep Singh Puri after the union minister played down the poll strategist's relevance in the upcoming Delhi Assembly elections.

"Who is Prashant Kishor? I don't know him. There is a chap who used to work in UN, then he joined one party, then another party and then another party," Puri told reporters on Friday when asked about Kishor being roped in by AAP in Delhi elections.

To this, Kishor called himself an ordinary man and asked why a senior leader like Puri would know him.

"He is a tall leader of the country and a union minister. Why will he know an ordinary man like me? Over 50 lakh people like me from UP and Bihar live and struggle to make a space for themselves in Delhi. How will such a senior leader like Puri Ji know so many people?" Prashant told ANI.

Kishor, also JDU vice president, said: "If a big person like Hardeep Singh Puri will try to know about such a big number of people, it will go against his status, post, and dignity. It will not suit his status."

The poll strategist, however, said that he knew about Puri as he is a union ministers as well as a BJP prominent figure in the Delhi.

"I know him because some of the works of his department are relevant in the Assembly elections in Delhi," he said.

Kishore also added that he knows of Puri as it is important to be well versed with political adversaries.

Kishor runs a political consultancy firm I-PAC which has been hired by the ruling Aam Aadmi Party (AAP) for the Delhi Assembly elections scheduled to be held early next year.

He had worked with Prime Minister Narendra Modi during the election campaign for the 2014 general elections. His firm also worked in the recent Andhra Pradesh Assembly elections for YSR Congress Party which swept the polls.