The 'Chalo Punjab' campaign launched abroad to gather up volunteers seems to have worked. 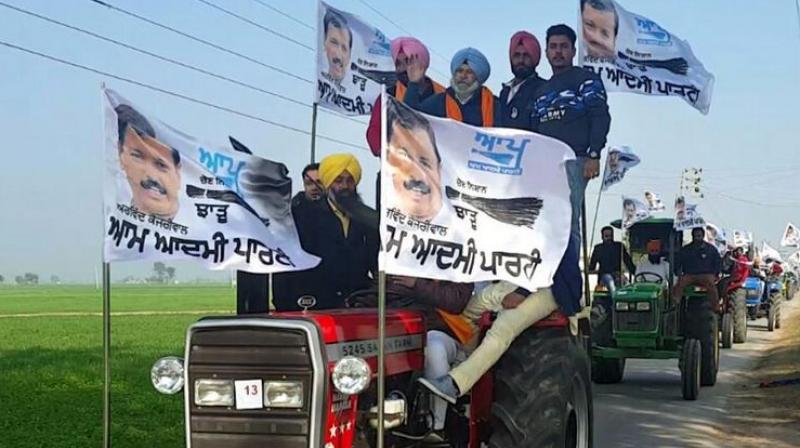 Ludhiana/Bhatinda: You have to hunt for an Indian flag. And most likely, you won't find it. The NRI wagon is here in Punjab's "khetaan" tay "gulley mohallay" and, they aren't here because Karan Johar is shooting his next "Shava-Shava" magnum opus. They are here to be part of Punjab's election.

Hundreds of them have arrived from various cities in "Kanneda" (Canada). In the southern belt of Punjab, known as the Malwa area, white jeeps with Canadian, Australian, British and American flags, are traversing the countryside bearing Punjabis, encouraging people to vote.

They are mostly supporters of the Aam Aadmi Party (AAP). The 'Chalo Punjab' campaign launched abroad to gather up volunteers seems to have worked.

Dalbir Singh has come from Canada and will be in Punjab for a month aiding the AAP.

The septuagenarian says, "I have come to help H.S. Phoolka win this election and am confident he will."

Former Supreme Court lawyer H.S Phoolka, who has a formidable legal reputation for having fought on behalf many 1984 Sikh riot victims, resisted joining politics for quite a while though he had received offers in the past. But like many AAP leaders, he too is in revolution mode and Dalbir Singh is one of thousands who have joined his campaign.

Among the many slogans that reverberate here in the lush green Malwa region is "Na Chitta nu, na daru nu, vote pao jhadoo nu" (Not drugs, not booze, but vote for the jhaadu) (AAP's election symbol).

Thousands of crates of alcohol have been caught in police raids in the run up to the polls. It is par for the course in Punjab. Something that the AAP says they want to change.

Dalbir Singh says, "I can't change things, I can only support the candidate who wants to change things in Punjab. We are all hurt seeing our state ruined. Sattar saal dekh liya in dono ko, ab kuch naya kartay hain." (We have seen these two - Akalis and Congress- for 70 years, let's do something new now).

NRI volunteers purposely dress differently. They wear their suits and ties even when they are campaigning in rural Punjab. They want to be identified as being different from the party they support. They want their 'pind' (village) to know that they have left their successful businesses or careers for a short break because they want to be part of the 'great change' that is going to come to Punjab.

The AAP's NRI brigade believe that Punjab has sunk so low that only a completely 'different person' with a "radical perspective" can stem the rot. They have reposed their faith in Arvind Kejriwal. It is indeed shocking to see turbaned Sikhs placing such a high premium on 'Dharam' (Justice) and 'Maryada' (Decorum) and be willing to be led by a non Jat Sikh who barely speaks the language, and till two years ago, was hardly known in Punjab. But now, he is more popular than the Punjabi AAP trio of Bhagwant Mann, Gurpreet Singh Ghuggi and H.S. Phoolka.

In Sangrur, Bhatinda, Barnala, Jalalabad, Mansa, Moga, Faridkot there is a phenomenal growth in the AAP's popularity at the cost of the Akalis and the Congress too.

Bhupinder Singh Sidhu is an NRI who returned to India in 2009 to be part of the rough and tumble of Punjab politics. He is fighting Balwinder Singh Bains in Ludhiana South. At a gurudwara in one of the mohallas, both candidates turn up for a Shokh Sabha (condolence meeting) to mourn with the family of the deceased.

Minutes later they are up and around campaigning. Sidhu tells me that he returned to India to be part of Manish Tewari's campaign when he thought that change was needed in the way things were being done in Punjab.

"I saw the condition of the poor here. It was appalling. I made up my mind to work to provide clean water and infrastructure to the people. Punjabis are very passionate about their community, their dharma. That is why wherever we are; we want to do things for our people. Expat Punjabis supported the present government, but they let down their own people. Now, Punjabis feel the Captain (Amrinder Singh) is the man who can deliver."

Sidhu has a band of NRI supporters. Major Deol who was named major and has no connection with the Indian Army has come from California. He says, "This government has made Punjab into a "Nasha ka Dariya" (A river of drugs). I was an Akali, but I have seen what Akali rule has done here. I have visited homes where there are three widows, all victims of the drug menace. The Akalis have pushed Punjab into a quagmire. Punjab needs a "Sher Da Puttar" (Son of a Lion) and that is the Captain."

Sukhpreet has come from Canada to support Congress candidate Sidhu. He says, "Many like me who left Punjab for better opportunities, feel like coming back home, but seeing the condition here, it is shocking. The youth need strong leadership and the Captain can provide that."

The Captain, meanwhile, says this is his last election and he wants a two-thirds majority to bring about drastic changes in the way Punjab is ruled. He says being a straight talker has helped him connect with expats on social media. He engages with them, enjoying, even "thokoing" (hammering) some when they hit back through tweets.

Captain Amrinder Singh, the Congress party's chief ministerial candidate says that hundreds of expat Punjabis from Canada, the United States and Australia have joined up as volunteers across Punjab, but is cautious enough to add that they are nationalists.

He endorses the Akali Dal's allegation that the AAP's expat support is suspect.

Captain Amrinder Singh says, "NRI money has come in despite demonetisation through some channels, but, I am more concerned with the ideology of the extreme Left and the Khalistanis who are supporting the AAP."

The former chief minister of Punjab says that an AAP victory would spell disaster for Punjab as such a result might ensure a slip into the separatism of the seventies.

The seasoned politician that he is, Captain Amrinder says, "Having seen Punjab in the eighties, the bloodshed, I know how things are going. Those expat separatists who are funding and supporting Kejriwal now, if he wins, will demand their pound of flesh later."