Section 144 has already been imposed in sensitive districts including Rohtak, Sonipat, Jhajjar amidst others as a precautionary measure. 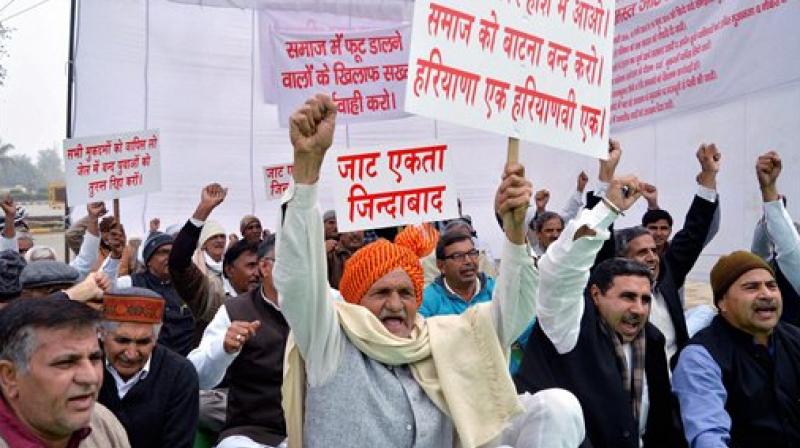 Chandigarh: Seeking reservation in government jobs for the community, members of Jat organisations on Sunday started their agitation in most districts of Haryana.

The call for the fresh stir has been given by some Jat outfits, especially those owing allegiance to the All India Jat Aarakshan Sangharsh Samiti (AIJASS) headed by Yashpal Malik.

"The agitation in Yamunanagar, Panchkula and Mewat districts of the state will begin from January 31," Malik said, adding "the dharnas are peaceful."

However, officials said Haryana this time has been put on maximum alert.

Section 144 has already been imposed in sensitive districts including Rohtak, Sonipat, Jhajjar and at other places as a precautionary measure, they said.

The assembly of five or more people in about 500 meters from national and state highways as well as railway stations in the city has been banned, officials said, adding paramilitary forces and state police personnel have been deployed in sensitive areas to maintain strict vigil.

"We are fully geared up to deal with any situation. Although the leaders of various agitating organisations have promised to hold dharnas in a peaceful manner, yet the administration is fully geared up to maintain law and order," Additional Chief Secretary (Home) Ram Niwas said.

The Haryana government had sought 55 companies of paramilitary forces from the Centre besides deployment of 7,000 Home Guards in the state.

Rapid Action Force has been deployed at Munak canal, which was damaged by the protesters during the 2016 February stir, officials said, adding central forces are also conducting flag marches in some sensitive areas since Saturday.

Rohtak and some of its neighbouring districts including Sonipat and Jhajjar were the worst-hit in last year's violence, which had also affected Delhi as protesters had cut water supply to the national capital.

Deputy Commissioners (DC) and Superintendents of Police (SP) have been directed to ensure that highways and railway tracks are not obstructed and no damage is caused to property, they said.

Meanwhile, 'Khap' (council) leaders stated that their immediate demands include the release of Jat youths from jails, withdrawal of cases registered during last year's agitation and government jobs to kin of those killed during the stir.

The Haryana government has assured jobs to kin of those killed during in the 2016 agitation.

In Jhajjar, the administration has suspended mobile phone services like voice-call, SMS and internet in the district from 8 am to 6 pm on daily basis.

District Magistrate Ramesh Chander Bidhan has directed telecom service providers to ensure compliance of these orders, an official spokesman said, adding the decision was taken to "prevent disturbance of public peace and tranquillity".

Anyone found violating these orders will be punished under Section 188 of IPC, he said.

The magistrate has also ordered that all liquor shops within 5 km of Rasalwala chowk and Jhajjar-Bahadurgarh Road would remain closed till further orders, the spokesman said.

DC Faridabad Sameer Pal Srow said there is complete peace in the district.