The court said, prayer for stay would be considered after 4 wks after the NIA and Maharashtra government filed their response. 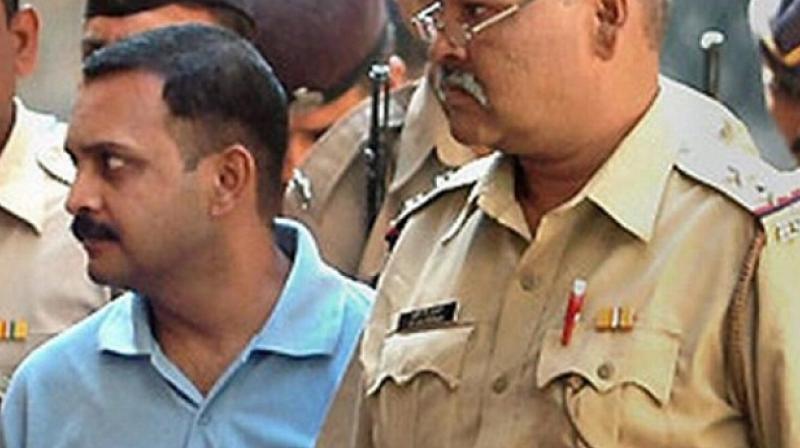 A bench of Justices R K Agrawal and A M Sapre, issued notice on Col Purohit’s special leave petition challenging an order of the Bombay High Court refusing to quash the cognisance taken by the trial court in the Malegaon bomb blast case. (Photo: PTI)

New Delhi: The Supreme Court on Monday refused to stay at this stage the criminal trial against Lt Col Prasad Shrikant Purohit in the 2008 Malegaon bomb blast case.

A bench of Justices R K Agrawal and A M Sapre, issued notice on Col Purohit’s special leave petition challenging an order of the Bombay High Court refusing to quash the cognisance taken by the trial court in the Malegaon bomb blast case.

The Bench after hearing senior counsel R Basant, appearing for the petitioner issued notice on the main appeal as well as on the application seeking interim stay of the trial returnable in four weeks.

The court said the prayer for stay would be considered after four weeks after the National Investigation Agency and Maharashtra government filed their response.

In his appeal against the High Court order, Col Purohit said he had sought quashing of cognisance taken by the Special Court, National Investigation Agency at Greater Bombay, of the offences initiated against the petitioner under the provisions of Unlawful Activities Prevention Act for want of valid sanction, mandated by S 45 (1) and (2) of the Act.

The High Court, while dismissing the petition, observed that the issue of sanction could be decided at the stage of trial. He said it is settled law that when a safeguard or a right is provided favouring the accused, compliance thereto has to be strictly construed and that absence of sanction prior to cognisance is not a mere technical defect.

Hence continuance of prosecution in the absence of a valid sanction shall be deemed to be non est in the eyes of law.

He said no purpose would be served by putting the accused through great stress and trauma of facing a trial without a sanction by the Competent Authority, in addition to the same being an abuse of process of law.

Thus, the sanction is not valid for want of compliance of mandatory provisions of S 45(2) r/w the rules of sanction for prosecution made thereunder.

Thus, in these circumstances, the Petitioner said he was challenging the judgment and order passed by the High Court dated December 18, 2017, dismissing his petition as well as the judgment and order dated December 27, 2017 passed by the Special Court (NIA), limited to the extent that it has refused to consider existence of a valid sanction or otherwise, prior to taking of cognisance of the offence. He also sought stay of the pending trial.