BSP president Mayawati said on Sunday that the law and order situation had deteriorated under the leadership of UP CM Yogi Adityanath. 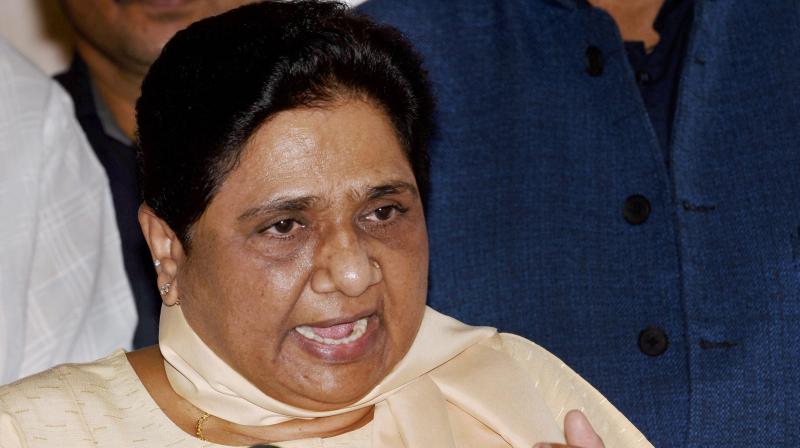 Lucknow/Kasganj: As sporadic violence continued in riot-hit Kasganj for the third day on Sunday, the police began house to house searches and over 80 people have been arrested in connection with Friday’s clashes.

Tension was palpable in Kasganj and the security forces remained on high alert. The Rapid Action Force and the Provincial Armed Constabulary personnel staged flag marches in the town as a confidence-building exercise.

Miscreants torched a kiosk in the early hours of Sunday morning, but UP director-general of police O.P. Singh said in Lucknow that the situation was under control.

“To ease the tension, security forces carried out flag marches in the area, and the police are conducting intensive patrolling and surveillance through drones to keep the peace. We are also carrying out house to house searches, and a pistol and country made bombs have been recovered,” he told reporters.

The DGP said the state government would invoke the National Security Act against the accused persons.

Sources said that the pistol and bombs were found in the house of one of the accused persons, who is absconding.

Senior officials are still camping in the troubled area and are supervising policing.

Internet services remained suspended on Sunday in the area that first witnessed the violence on Republic Day when a few people riding motorcycles and carrying the tricolour were pelted with stones. One person was killed in the clashes that followed.

Fresh violence had broken out on Saturday, when a group returning from the cremation attacked shops and a religious structure. A few more shops and buses were torched in the evening.

Meanwhile, the family of Chandan Gupta, who was killed in the communal clashes on Friday, staged a demonstration in Kasganj and demanded that the deceased be given the status of a martyr. “He was killed because he refused to repeat a slogan against India,” his mother said.

Deputy chief minister Keshav Prasad Maurya described the violence as unfortunate, and said the people behind it would not go unpunished. Samajwadi Party spokesman Sunil Singh “Sajan” sought more than just an assurance from the state government. “The state government must act tough on the anti-social elements and take immediate action,” he said. He blamed right-wing activists for fanning communal passions and engineering the riots.

He alleged for the past three days volunteers of the RSS, Vishva Hindu Parishad and ABVP were threatening people and an atmosphere of fear prevailed. “And the government is quiet. The police is helpless,” he added.

BSP chief Mayawati said on Sunday that the law and order situation had deteriorated under the leadership of UP chief minister Yogi Adityanath, and that his government had failed to control the situation in Kasganj.

She claimed that in the entire country, specially in BJP-ruled states like UP, Gujarat, Madhya Pradesh, Haryana, Rajasthan and Maharashtra, development and public welfare activities had taken a backseat while a poor law and order situation prevailed.

“In UP, there is no rule of the Constitution, but a jungle raj-like atmosphere is prevailing. The latest example is that of Kasganj district, where on January 26 there was tension. The tension is still prevailing, and the state government seems to be failing here,” she said.

UPCC spokesperson Virendra Madan said that communal violence could be linked to the Lok Sabha polls scheduled for next year. “The state government must show seriousness and control the situation at the earliest”, he added.

In Kasganj, meanwhile, the administration also organised a meeting of the district peace committee on Sunday morning to restore normality. “At the meeting of the peace committee, who-se members include prominent citizens of the district, it was decided that shopkeepers will open their shops and commercial establishments,” ADG Agra Ajay Anand said.

Aligarh divisional commissioner Subhash Chandra Sharma said the peace committee meeting was held at the nagar panchayat office. He said that shops selling tea, snacks, vegetables, milk and medicine were already allo-wed to remain open, and normality would as others opened their shops. “The administration is acting tough on those who had indulged in the violence, based on the video evidence,” Mr Sharma said.

Terming the Kasganj violence as unfortunate, deputy CM Dinesh Sharma said that not even a single guilty person would be spared. Speaking to reporters in Kanpur, he said: “Let me tell you that not a single person responsible for this incident, will be spared. Chief minister Yogi Adityanath is himself monitoring the developments, and stringent punishment will be meted out to the guilty, no matter how big the guilty is or how strong his political connections are.”

He added: “Now we have strong laws. It is a warning to criminals that if they conspire to create riots or rifts in society, or indulge in dacoity, then all those who indulge in these acts will be punished, also their conspirators.”