Explosives were found during searches and police said the stringent National Security Act would be invoked against the culprits. 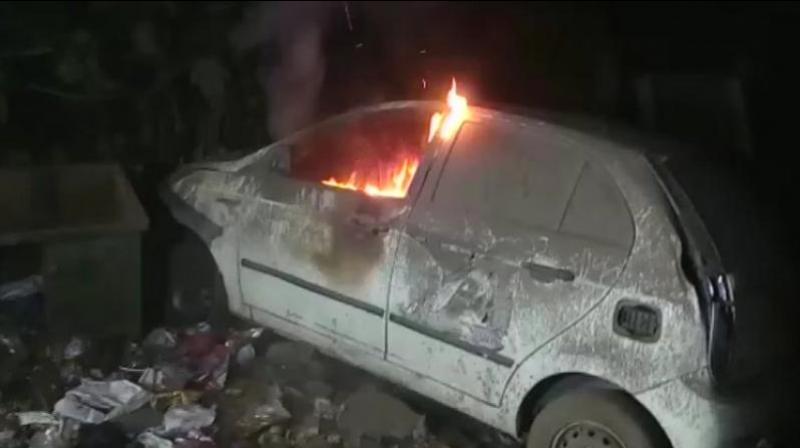 Cases were registered under various sections of the IPC, CLA (Criminal Law Amendment) Act and for violation of the National Flag Act. (Photo: ANI/Twitter)

Kasganj (Uttar Pradesh): As many as 112 people were arrested and security forces personnel intensified vigil in the strife-torn Kasganj in Uttar Pradesh where the situation remained tense but peaceful on Sunday, two days after clashes between two communities claimed one life.

In the evening, the UP Police said the situation was headed towards normalcy.

They also said three drone cameras had been deployed for aerial surveillance.

Explosives were found during house-to-house searches following which the state police chief said the stringent National Security Act (NSA) would be invoked against the culprits.

The Yogi Adityanath-led government, meanwhile, stressed that the guilty would not be spared.

It said five cases have been registered so far, of which, three were registered by station in-charge of Kasganj Kotwali.

Cases were registered under various sections of the IPC, CLA (Criminal Law Amendment) Act and for violation of the National Flag Act, the statement said.

"The situation is heading towards normalcy, and markets have opened. Three drone cameras have been deployed for aerial surveillance of the entire city as most of the incidents took place in the peripheral areas," Additional DG (Law and Order) Anand Kumar said.

"The IG, Aligarh has ordered the setting up of a special investigation team which will go through all evidence and objectively probe the case," the ADG (L&O) said.

Principal Secretary (Home) Arvind Kumar also said that normalcy was being restored in the city.

At least three shops, two private buses and a car were torched in Kasganj on Saturday, after a young boy was killed in clashes following stone-pelting by a mob on a motorcycle rally taken out to celebrate the Republic Day.

In Lucknow, DGP OP Singh said, "We are speaking to people, the guilty are being arrested, intensive checking and house-to-house searches were undertaken. And this is the reason why the situation is absolutely under control."

Referring to the incidents that led to the violence, he said there was stone-pelting between two groups resulting in the death of one person and injury to another.

"The police acted swiftly and controlled the situation, and we have intensified patrolling since the outbreak of the tension," the DGP said.

Asked whether any permission was taken for a 'Tiranga Yatra', the DGP said no such nod was required.

"January 26 is a national event, and no permission is needed. This was a 'prabhat pheri' (morning event)...Some anti-social elements started pelting stones. Police immediately reached the spot and controlled the situation by arresting a few people. Since then, we are keeping a close watch. Today, there was no worrisome incident," he said.

Also read: Kasganj communal clash a blot on the state: UP Governor

The DGP said stringent action would be taken against the guilty.

"So far more than 80 people have been arrested. House-to-house searches are going on. During the searches explosives were found. The National Security Act (NSA) will be slapped on criminals for vitiating the atmosphere," he said earlier in the day.

The administration also organised a meeting of the district peace committee at the nagar panchayat office this morning to restore normalcy.

"At the meeting of the peace committee, whose members include prominent citizens of the district, it was decided that shopkeepers will open their shops and commercial establishments," ADG Agra, Ajay Anand, said.

"The administration is acting tough on those who had indulged in the violence, based on the video evidence," Sharma said.

Terming the violence as unfortunate, Dinesh Sharma told reporters in Kanpur that not even a single guilty person would be spared.

"Chief Minister Yogi Adityanath is himself monitoring the developments and stringent punishment will be meted out to the guilty, no matter how big he is or how strong his political connections are," Dinesh Sharma said.

He said a criminal was a criminal irrespective of his caste, creed or religion. Such incidents will not be allowed to happen in any other place, he stressed.

"Now we have strong laws. It is a warning to criminals that if they conspire to create riots, rifts in the society, or indulge in dacoity, then all those indulge in these acts will be punished and also their conspirators," he said.

Meanwhile, the opposition BSP and SP targeted the state government on the law and order front.

In a statement, BSP chief Mayawati claimed that in the entire country and especially in BJP-ruled UP, Gujarat, Madhya Pradesh, Haryana, Rajasthan and Maharashtra, development and public welfare activities had taken a backseat while a poor law and order situation prevailed.

She alleged that there had been criminalisation of the ruling BJP at every level.

"In UP, there's no rule of Constitution, but a jungle raj-like atmosphere is prevailing. The latest example is that of Kasganj. Tension is still prevailing and the state government seems to be failing here," Mayawati said.

She said the BSP condemned the violence and demanded stringent punishment for the guilty.

Samajwadi Party spokesperson Sunil Singh Sajan alleged, "The government is staging riots in Kasganj. We do not want the resignation of the chief minister. We simply want peace and normalcy to return to the place which is synonymous with the Ganga-Jamuni culture of the state".

He alleged that for the past three days volunteers of the RSS, the Vishva Hindu Parishad and the ABVP were threatening people and an atmosphere of fear prevailed. "The government is quiet. The police is helpless," he claimed.