'We should rise above politics and make most use of our healthy parliamentary committees system and have proactive discussions,' Modi said. 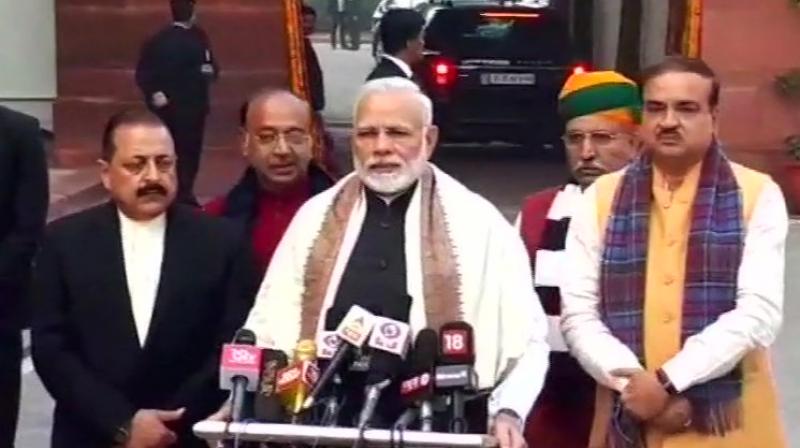 'We should think about the well-being of rural India, farmers, Dalits, tribal communities and labourers,' Modi said. (Photo: ANI/Twitter)

New Delhi: Prime Minister Narendra Modi on Monday asked all the political parties to help pass the triple talaq bill in the Budget session of Parliament as a New Year gift to Muslim women. Modi said, "we have to pass this bill and protect Muslim women".

The Prime Minister said the budget will add new vigour to India's development and will fulfil aspirations of people. "We should rise above politics and make most use of our healthy system of parliamentary committees and have proactive discussions," he said.

Modi also said, "We should make use of our system of parliamentary committees and discuss aspects of the Budget. We should think about the well-being of rural India, farmers, Dalits, tribal communities and labourers."

Terming the budget session important, the Prime Minister said, "The world is optimistic about India. Agencies like World Bank and International Monetary Fund (IMF) have been giving an optimistic opinion of the country."

The last full budget before the 2019 general election will be presented on February 1.

At the all-party ahead of the Budget session, the Prime Minister on Sunday, said the Budget session is very important and the government takes very sincerely the suggestions given about it by opposition during discussion in all party meeting.

The Opposition, however, said it planned to counter the government on issues such as incidents of rape and other atrocities on women, alleged attacks on the Constitution and constitutional institutions and the plight of traders, besides the recent incident of communal violence in Uttar Pradesh.

The opposition has also asked the government to allow a discussion on these issues during the Budget session.

The focus of the Union budget will be job creation, small businesses and rural schemes, reported news agency Reuters, quoting officials. "The budget is likely to offer incentives to the farm sector and small businesses," Reuters quoted an official as saying.