India   All India  29 Jan 2021  Arrangements for drinking water, other facilities in place for farmers: Sisodia
India, All India

Arrangements for drinking water, other facilities in place for farmers: Sisodia 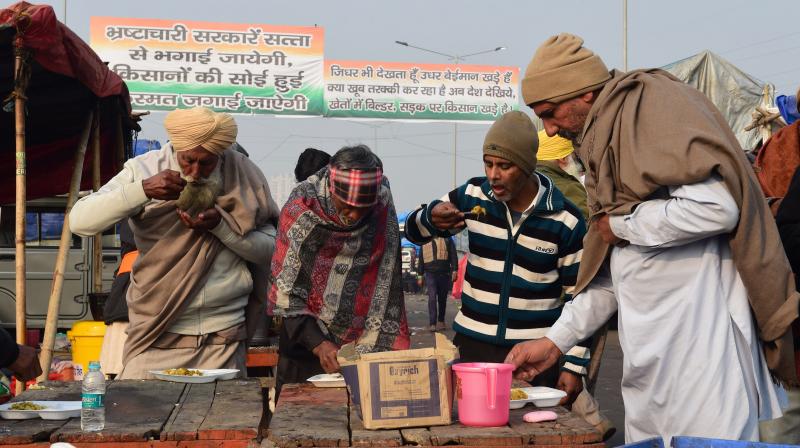 Farmers having breakfast during their ongoing protest against the new farm laws, at Ghazipur border in New Delhi, Friday, January 29, 2021. (PTI /Kamal Kishore)

New Delhi: Delhi Deputy Chief Minister Manish Sisodia on Friday said the city government has made arrangements for drinking water and other facilities for the farmers protesting at the Ghazipur border.

The farmers protesting under the Bharatiya Kisan Union's (BKU) banner claimed on Thursday that the local administration withdrew water tankers and snapped the power supply to the UP Gate protest site.

"Farmer leader Rakesh Tikait asked Chief Minister Arvind Kejirwal to provide water and other facilities at the Ghazipur border for the farmers. The arrangements were made on Thursday night," Sisodia said in a tweet.

The Aam Aadmi Party (AAP) leader said he would visit the Ghazipur border to oversee all arrangements.

Around 500 BKU members stayed put on the Delhi-Meerut Expressway on Friday, notwithstanding the Ghaziabad administration's ultimatum to vacate the protest site.

More farmers are joining in from western Uttar Pradesh and Haryana, following an emotional appeal made by Tikait, who has defiantly held his ground.

Tension prevailed at the protest site throughout Thursday as police and paramilitary forces in anti-riot gear conducted flag marches on either side of it.

However, excess forces were removed later at night.