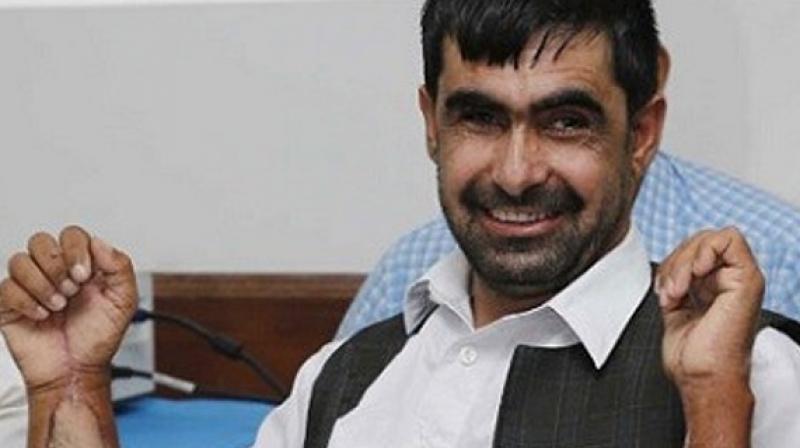 File photo of Major Abdul Rahim of the Afghan army who received a transplant of hands from a Kerala accident victim.

Kochi: When Major Abdul Rahim, a soldier in the Afghan army, died in a bomb blast in Kabul on February 19, a tear was shed for him in far away Ernakulam district of Kerala.

The major had received a transplant of hands from Eloor native T G Joseph back in 2015, and the latter’s family had grown attached to the Afghan soldier.

Maj. Abdul Rahim, a bomb disposal expert, had lost his hands in an explosion in 2012. For three years thereafter, he struggled with his handicap. Then, when 54-year-old Joseph passed away in a road accident, it was decided to give his hands to the Afghan major.

The transplant procedure was successfully performed by a team of doctors led by Dr. Subrahmania Iyer at the Amrita Institute of Medical Sciences in Kochi.

After the transplant and an intensive spell of physiotherapy, Abdul Rahim could regain a considerable part of his hands’ functions. He rejoined the army and returned to defuse bombs in his war-torn country.

“We were shocked to hear of the demise of Major Abdul Rahim. Though Joseph left us, a part of him lived on. Abdul Rahim was a living memorial for us. Whenever he came to the Amrita institute for a consultation, we used to visit him,” Joseph’s wife was quoted as saying by Mathrubhoomi daily.

Major Abdul Rahim struck up a good friendship with his predecessor, in a way of speaking: the first person to have had a successful hand transplant at the Amrita Institute of Medical Sciences. T R Manu became a close friend of the Afghan solider and kept regularly in touch.