After the Delhi riots, Samreen is contemplating dropping the middle name for the “safety” of her son. 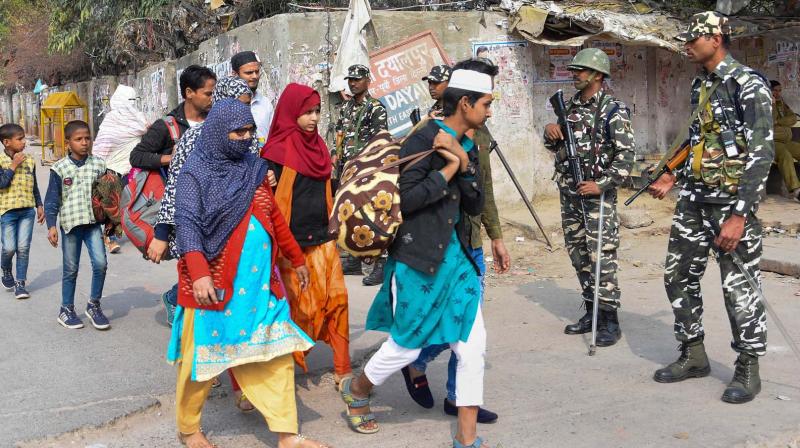 New Delhi: Deadly riots in Delhi might be ebbing, but the scars remain.

Gurgaon-based Samreen Farooqui, a documentary filmmaker who was married to a Bengali-Hindu, had chosen a “secular” name for her five-year-old son Abhijeet Farooqui Chatterjee. After the Delhi riots, Samreen is contemplating dropping the middle name for the “safety” of her son.

Privileged or not fear stalks a large section of Indian Muslims after sectarian riots gripped the national capital. Enactment of the Citizenship Act, followed by relentless hate-mongering and the communal conflagration, have sparked a feeling of anxiety and anger among Muslims.

“I am angry as I feel helpless and I am scared because I don’t know what is going to happen in the future,” Samreen said. Samreen is not a practising Muslim. Yet today she is grappling with her religion and nationality. “I never thought a time will come when my religion will become my only identity. Never thought I will have to pause to think before I mention my surname,” Samreen said.

It was the other day, Samreen was travelling from her Gurgaon home to Noida office in a cab. The driver, who had no idea that the passenger was a Muslim, started talking about Shaheen Bagh and told her that in Haryana “we Jats will never allow such protests.”

After that his description of the minority community made Samreen squirm. “I kept looking out of the window. I simply wanted the drive to end,” she said.

A working, independent woman, Samreen could never imagine that her being married to a Hindu would perhaps become the only shield to “protect” her from the “hate-filled atmosphere.” Samreen wondered; if this was how she felt despite being “privileged”, what was happening to those who were “struggling to make ends meet?”

In Mumbai, Shabnam (name changed), another Muslim working woman is having a “meltdown.” Shabnam has recently bought a two-bedroom flat in a Hindu dominated Society in east central Mumbai.

After doing up her flat, Shabnam spent days in selecting a nameplate to be hung outside her apartment.  After Delhi burnt, her “worried” relatives have asked  her to take down the “Muslim nameplate to avoid persecution.”

She took it down this afternoon.  It sounds nice and “revolutionary” when one listens to the poem — “Kagaz nahi dikhayenge” — Shabnam said and then revealed that these days she was spending most of her time digging out documents to prove her Indian identity. “Kagaz toh dikhana parega,” she blurted out.

That “nagging and numb fear”  had been haunting Shabnam after the CAA and NRC were announced.  “Post communal violence in Delhi, it has become scary,” she almost whispered over the phone.

If Samreen is married to a Hindu, Shabnam lives in her flat with her Hindu boyfriend.

She feels “lucky” that her partner’s family is “chilled out” and “secular.” As the shadow of sectarian politics gets darker, Shabnam like Samreen also seeks “safety” in the religion of her partner. “I had never thought like that. But today I have to say that being with a Hindu feels safer,” Shabnam said.  Gholam Mohammed is a small-time leather exporter based in Kolkata. He lives in one of the Muslim ghettos in the Park Circus area.

A few months back, he tried to get out of the ghetto and rent out a flat in a Hindu dominated society at Karaya Road. He paid an advance to the Hindu owner. When the Owners’ Association got to know about the deal,  they shot a mail to the owner, which read. “...Most of the owners are not in favour of letting in any more Muslim families in this Housing Estate...”

Of nearly 150 odd flats in the society, there are only three Muslim families. But then, there are people who still believe in a pluralistic society and humanity. Azhar (name changed), a young businessman, lives in a posh and an upmarket society in Gurgaon. Of the 500 odd flats, nearly 50 are being occupied by Muslims. “Maybe in a cosmopolitan atmosphere, we need not worry. Yet we don’t want to take chances,” he said.

Azhar and some other Muslim residents have got in touch with their close Hindu friends in the society. “They have given us their duplicate keys. In case of any trouble, we can shift to their flats, even when they are not there,” Azahar revealed. Shabnoor, a working journalist lives next to Jamia in a PG  accommodation. She is a practising Muslim and so are her parents, who live in Meerut. What she said reminded one of the chilling words of  the supreme leader — “Yeh aag lagaane vaale kaun hain, woh unke kapdon se hi pata chal jaata hai (those setting the fire can be identified by their clothes).”

Shabnoor’s father was planning to come to Delhi for a medical check-up. “Since he wears a skull cap, I told him not to come now,” Shabnoor said. At their Meerut home, Shabnoor’s parents along with a lawyer are collecting documents to prove that they always belonged to India.

A silent rage and a numbing fear stay with Shabnoor. Shabnoor says that she and her family have begun feeling like “second class citizen.” For her, “the atmosphere has become so polarised that we are scared to reveal our identity when we  step out.”

She felt that following a “raging vitriolic campaign against the minority” attitude of some of her Hindu friends had “changed.”  She said: “None of them came to find out how I was doing.” There are times, Shabnoor feels “defeated and scared.”  The only silver lining for Shabnoor is the anti CAA and NRC protests.

“Maybe these will deter the authorities to take any drastic step,” she hopes. When told about others who feel “safer” because they were either married to or living in with Hindu partners, Shabnoor, paused for a moment and said “I know what they meant. But it is sad.”

Politically, this section has begun to feel alienated since the Opposition parties have been “behaving like BJP’s B team.” Shabnoor and Samreen, feel “betrayed” by the Delhi chief minister, Arvind Kejriwal and his party AAP. “When he had nothing much to lose, Kejriwal did all possible forms of protests. Now when Delhi burnt, he merely went to Rajghat for a photo-op,” Samreen lashed out.

This sentiment against the Delhi chief minister and AAP resounded across the riot-torn north-east Delhi. Speaking of fear one Dr Pooja Tripathi, who was travelling in a metro recently tweeted about a co-commuter. The commuter reportedly told Dr Tripathi, “I took metro because in Ola booking my name reflects. My daughter was worried about me travelling alone. It’s not safe anymore...”