Justice Chelameswar questioned the probe initiated by K'taka HC against a District and Sessions judge at the instance of Law Ministry. 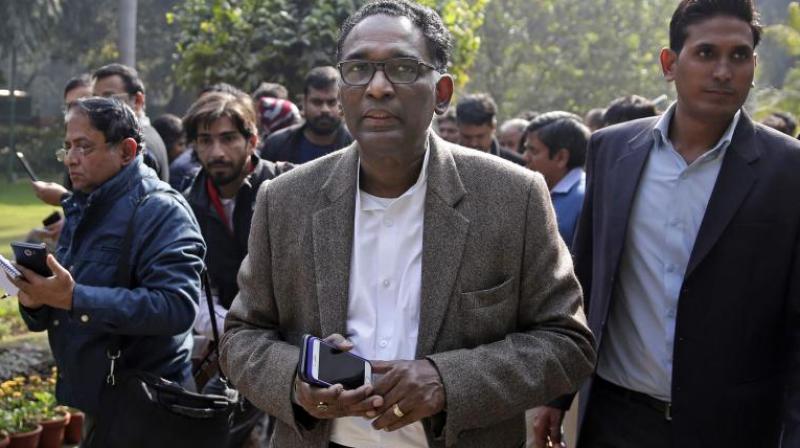 Justice Chelameswar, in his letter written on March 21, cautioned that 'the bonhomie between the judiciary and the government in any state sounds the death knell to democracy'. (Photo: AP/File)

New Delhi: Senior-most Supreme Court judge, Justice J Chelameswar, has shot off a letter to the Chief Justice of India (CJI) asking him to consider convening a full court to take up the issue of alleged executive interference in judiciary.

Justice Chelameswar, in his letter written on March 21, cautioned that "the bonhomie between the judiciary and the government in any state sounds the death knell to democracy".

The unprecedented letter, copies of which were also sent to 22 other apex court judges, has questioned the probe initiated by Karnataka High Court Chief Justice Dinesh Maheshwari against District and Sessions Judge Krishna Bhat at the instance of Union Ministry of Law and Justice, despite his name being recommended for elevation twice by the Collegium.

"Someone from Bangalore has already beaten us in the race to the bottom. The Chief Justice of Karnataka High Court is more than willing to do the Executive bidding, behind our back," Justice Chelameswar wrote in his six-page letter.

Raising the issue of judicial independence, he said, "We, the judges of the Supreme Court of India, are being accused of ceding our independence and our institutional integrity to the Executive's incremental encroachment.

"The executive is always impatient, and brooks no disobedience even of the judiciary if it can. Attempts were always made to treat the Chief Justices as the Departmental Heads in the Secretariat. So much for our 'independence and preeminence' as a distinct State organ".

Justice Chelameswar, who had held the unprecedented January 12 press conference along with three other senior judges questioning the allocation of cases by the CJI, referred to the "unhappy experience" where the Government sat tight over the files even after the Collegium recommended names for appointment in the higher judiciary.

"For some time, our unhappy experience has been that the government's accepting our recommendations is an exception and sitting on them is the norm.

'Inconvenient' but able judges or judges to be are being bypassed through this route," he claimed.

The apex court judge, who is demitting office on June 22, took serious note of the communication between the Karnataka High Court chief justice and the executive saying, "the role of High Court ceases with its recommendation".

He said that any correspondence, clarificatory or otherwise, has to be between the executive and the Supreme Court.

Referring to Bhat's case, he said, "To my mind, I could recollect no instance from the past, of the executive bypassing the Supreme Court, more particularly while its recommendations are pending, to look into the allegations already falsified and conclusively rejected by us.

"Asking the High Court to re-evaluate our recommendation in this matter has to be deemed improper and contumacious.

"He said the judiciary may not be "far-off" when the executive would directly communicate with the High Court about the pending cases and ask what orders are to be passed.

"Let us also not forget the bonhomie between the judiciary and the government in any State sounds the death knell to democracy.

We both are mutual watchdogs, so to say, no mutual admirers, much less constitutional cohorts", he said in the letter to the CJI.

Asking the CJI to take up the issue of executive interference in judiciary by convening a full court on the judicial side, he said this was necessary in order to ensure that the institution (Supreme Court) remained relevant under the scheme of the Constitution.

He then referred to an instance from the past when the apex court had taken serious note of direct communication of the then Law Minister with the High Courts on the issue of judges' transfer which had finally led to the judgement in first judges case in 1981.

Later, the Collegium had assumed power with regard to judges' appointment in higher judiciary.

In 2016, then Chief Justice of India TS Thakur had asked then High Court chief justice S K Mukherjee to hold an inquiry against Bhat on certain allegations levelled by a subordinate woman judicial officer.

Bhat's name was later recommended after the probe had given him a clean chit.