India   All India  29 Mar 2018  Can’t hate those who stir hate against me: Rahul Gandhi
India, All India

Can’t hate those who stir hate against me: Rahul Gandhi

The Congress has been marinating on its Twitter handle that the “mainstream media’s silence on the “sting” is a telling tale on its own credibility”. 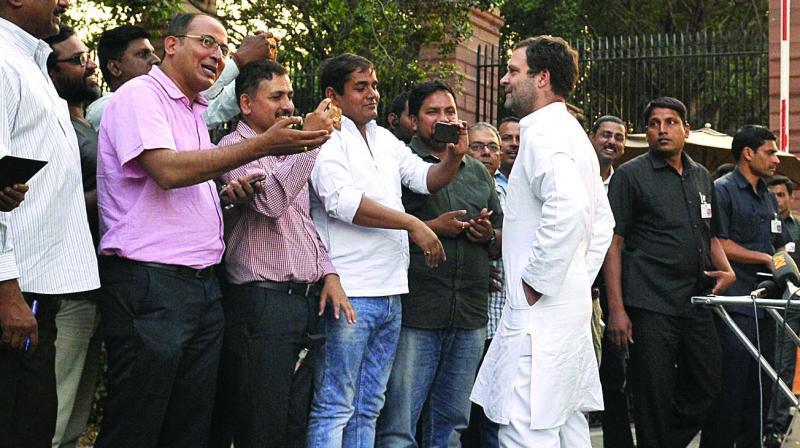 Congress president Rahul Gandhi talks to mediapersons outside Rashtrapati Bhavan after a delegation of the Opposition parties submitted a memorandum to President Ram Nath Kovind in New Delhi on Wednesday. (Photo: Pritam Bandyopadhyay)

New Delhi: Citing a recent sting operation by a news portal, Congress president Rahul Gandhi derided the media for allegedly stirring hate against him and said he was honoured they made their livelihood spinning lies about him. The sting operation by news portal Cobrapost had allegedly revealed that 17 media firms were ready to push communal reports for cash without even raising a bill for it. “I can never hate those who try to stir up hate against me, with fake stories and their cunning twisting of facts. For them it’s just business; hate sold for a price, as the Cobrapost expose shows. I’m blessed and honoured that they make their livelihoods spinning lies about me,” Mr Gandhi tweeted.

The Congress has been marinating on its Twitter handle that the “mainstream media’s silence on the “sting” is a telling tale on its own credibility”. The video of the sting operations purportedly showed that representatives of many of these media companies are ready to show stories to suit a particular slant.

Representatives of 17 media companies shown in the “sting” seem to agree to push a pitch “soft Hindutva” agenda, and closer to the upcoming general elections, many of them are seen willing to run content that would have shown Opposition leaders Rahul Gandhi, Akhilesh Yadav and Mayawati in a negative light. Most of the media representatives shown in the “sting” were either owners of regional news outlets or worked as senior executives on the business-side of the media companies.

At several occasions the Congress has alleged an apparent bias against itself in the media. The party had also asked the journalists not be scared instead to report facts.

Mr Rahul Gandhi’s remarks on the media come at a time when the Congress and BJP are engaged in a war of words over allegations that their respective apps were compromising personal user data to a third party without the users’ consent.