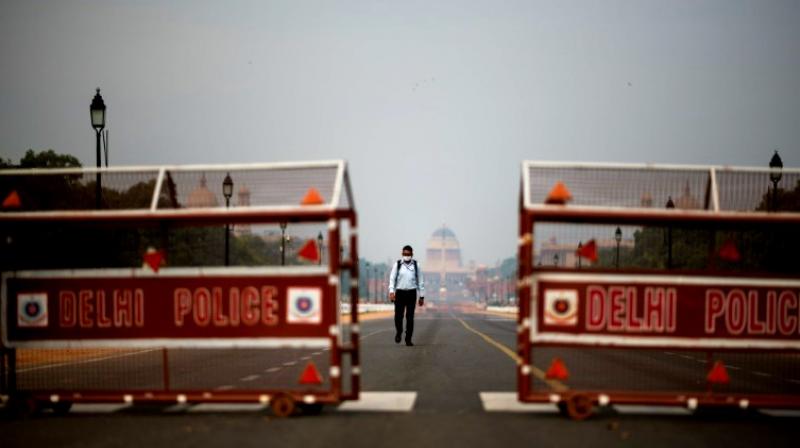 Joint report prepared by experts in the health, management, logistics and finance sectors favoured another lockdown in May as there are chances of a second peak in Covid-19 cases. (AFP)

Vijayawada: India may have to go in for a second lockdown sometime in May to avoid a second peak in the incidence of Covid-19, a report says.

The joint report prepared by experts in the health, management, logistics and finance sectors favoured another lockdown in May as there are chances of a second peak in Covid-19 cases.

Significantly, the report recommended the first lockdown between March 20 and April 12 as the best remedy to contain the virus.

The report prepared on March 17, a few days before prime minister Narendra Modi announced the nationwide 21-day lockdown, was in favour of restrictions including clamping of Section 144.

Taking lessons from the 1918 flu pandemic in the United States, which formed the base across the globe for the present lockdown of several nations in the wake of Covid-19, the report recommended easing restrictions for a month from April 17 and clamping down again between May 18 and 31. It suggested that normalcy would be restored thereafter while the government should encourage people to continue to maintain hygiene and social distancing as much as possible.

Countries which acted early and tough like South Korea, Japan, Thailand and Singapore are able to “flatten the curve” and bring down cases compared to those in the wait-and-watch mode like the US, Italy, France and Iran.

The first batch of countries succeeded in containing the infections to below 10,000 population, the second group remained a mute witness to the infections crossing the 25,000-mark.

The Wuhan lockdown experience also proved that at least 10,000 lives could be saved in India by imposing the lockdown from March 20 rather than waiting for a month more, the report said. It prepared worst and best case scenarios and concluded that mortality in the country in a 100-day period could be reduced by at least five to six times with aggressive social distancing. The susceptibility, exposure, mid to critical infections, health care facilities and recovery were taken into consideration while preparing the two different scenarios.

The researchers as well as governments preparing the action plans to fight Covid-19 have been largely depending on learnings from the 1918 Flu Pandemic in the cities of Philadelphia and St Louis in the US.

The infections started reporting from September 17, 1918, in Philadelphia but the administration took light of it and even allowed a city-wide parade on September 28 and implemented lockdown only on October 3 by which time the death rate peaked.

In contrast, St Louis which detected the first case on October 5 clamped restrictions by October 7 and contained the spread. The time delay of 14 days from detection of first case to clampdown resulted in three to five doubling times of death rate in Philadelphia, the report pointed out.