Stone-pelting goes beyond social networking and alleged funding from across the border. 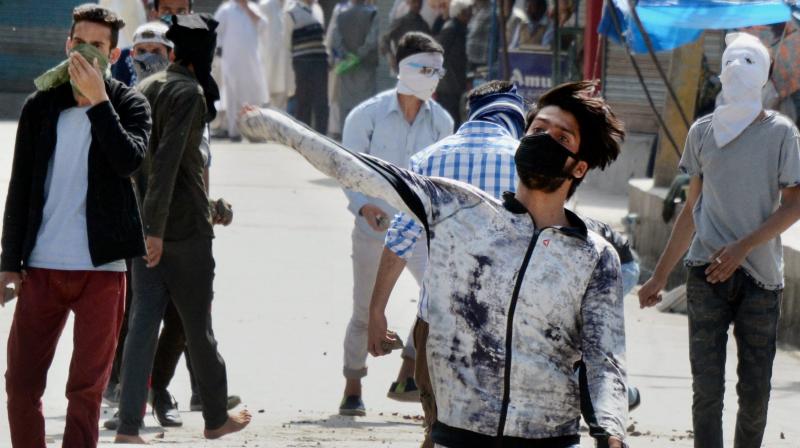 Youth throw stones on security personnel during a protest against the police action on protesters in Kupwara, in Srinagar. (Photo: PTI)

Srinagar: Earlier this month, authorities in Jammu and Kashmir banned Facebook, Twitter, WhatsApp and 19 other social media platforms for one month on the premise that their “misuse” by “forces inimical to peace” is responsible for spreading the stone-pelting mayhem in the Valley.

But the move is useless as snapping Internet services 28 times during law and order crises in the past five years failed to stop more and more youth from joining stone-pelting brigades.

The gag has termed “ill-conceived and idiotic” by the Opposition which also took a jibe at some BJP leaders, including former defence minister Manohar Parrikar, who had in the backdrop of “foreign funding” charges claimed that PM Narendra Modi’s demonetisation move stopped stone-pelting in Kashmir.

But social media has been seized as a tool to voice political sentiments by many Kashmiris in or outside the Valley. Also, there have been a fewer instances of it being used for spreading rumours and falsehood about happenings within the state but the law-enforcing agencies quickly acted against those behind mischiefs.

Stone-pelting goes beyond social networking and alleged funding from across the border. It is rooted in the political dilemma of its Muslim population and a corollary of the failures and broken promises of successive governments.

“Kani Jung” as the stone-pelting pastime of Kashmiri youth is known here and literally means “stone war” sparks off even at slightest provocations.

The presence of security forces in large numbers even in narrow and dark alleys is enough to bring hordes of young boys out to attack them. Critics say that if there are no uniformed men in sight, the Valley’s youth will find nothing around for display of their anger. However, officials justify such enormous presence of security forces saying this has been necessitated to keep “miscreants” and other “trouble-makers” away.

Though women participation in “stone-pelting” pursuit is not a new phenomenon but dates back to the 1960s and 1970s when the Valley had, on several occasions, plunged into turmoil over varied issues, the manifold participation of them in “Kani Jung”, is a worrying trend.

Some officials and mainstream politicians too have publicly said that it is time to put their heads together to solve the problem amicably. The home ministry has come up with the idea of raising an all-women force to deal with stone-pelting by females. But Kashmir watchers say that administrative and military measures have failed in the past and will certainly not do any good now. The answer to the predicament lies in political engagement of its alienated population and can bear fruit only if and when all those who matter in Kashmir politics are brought around the negotiating table and not just those who have been reduced into bit players in existing scenario.