Don't allow CJI to fly abroad, he will 'spread virus of casteism': Karnan

ustice Karnan on Friday ‘deferred’ the hearing against 7 SC judges, including CJI JS Khehar, in a case of 'caste discrimination'. 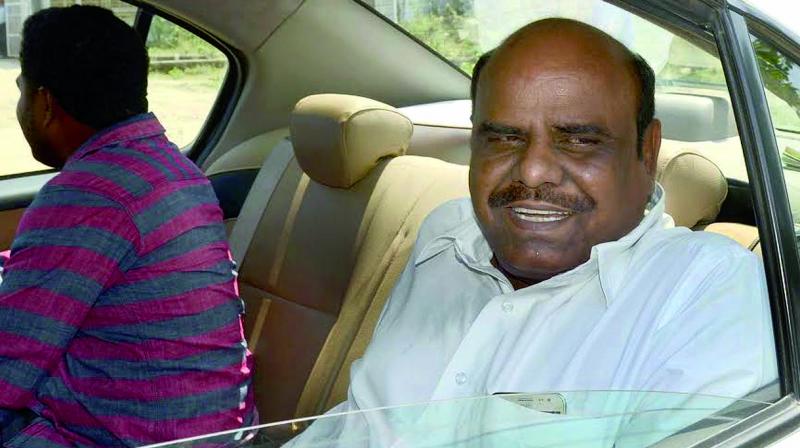 Justice C.S. Karnan after he was served a bailable warrant in Kolkata. (Photo: Asian Age)

However, Karnan, against whom the CJI has issued a contempt notice, also ‘directed’ the Air Control Authority in New Delhi not to permit the seven judges to fly abroad till the case is disposed off, since their ‘offence’ involves caste discrimination against him.

Earlier this month, Karnan had directed the 7 judges to appear before him on Friday.

But in his fresh order on Friday, Karnan said, “Today the above mentioned accused 1 to 8 are called absent hence their matter is re-posted to 01. 05. 2017 (Monday) to enable their reappearance. In the meantime, this court directs the Air Control Authority (referring to the Airports Authority of India) New Delhi, not to permit the said accused 1 to 8 from going abroad until the disposal of this crucial issue, since the nature of the offence, that is caste discrimination, is not only a heinous crime but also a very cruel atrocious act of heinous crime, and is punishable as per the Constitution.”

Karnan thus also included an eighth judge in his order, the identity of whom is not known.

Bizarrely, Karnan then claimed that the reason for his ‘order’ directing airport officials to prevent the judges from flying abroad was, “if the accused are permitted to travel abroad, there is the probability of the virus of caste discrimination spreading in the said country by such perpetrators.”

In February, the Supreme Court had issued a contempt notice to Karnan for ‘degrading the judicial institution’ after Attorney General Mukul Rohatgi called for contempt proceedings against him for ‘scurrilous’ letters against sitting and retired judges of the High Courts and Supreme Court.

Justice Karnan had written to the Prime Minister and accused several retired and sitting judges of corruption. Following the apex court order, Karnan 'summoned' 7 Supreme Court judges including the CJI to his 'residential court', and accused them of caste discrimination.