India   All India  29 Apr 2018  UP minister’s house attacked over statement on liquor
India, All India

UP minister’s house attacked over statement on liquor

The minister had drawn the ire of the two communities for allegedly saying that Rajputs and Yadavs consume more liquor than others. 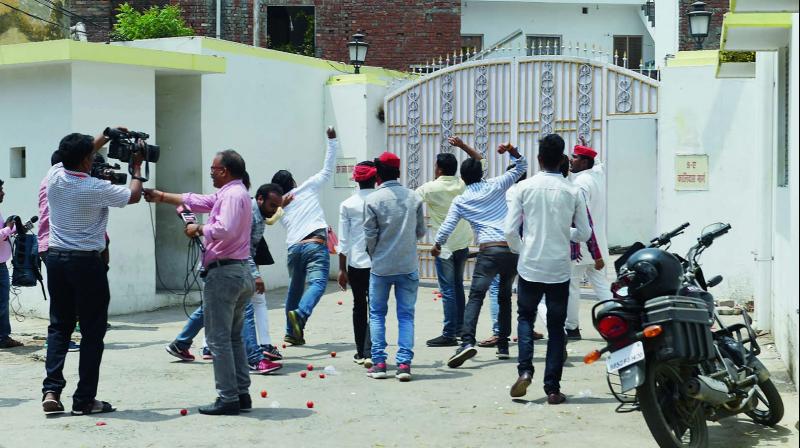 A group of protesters hurl eggs and tomatoes at the residence of UP Cabinet minister Om Prakash Rajbhar in Lucknow. (Photo: PTI)

Lucknow: UP minister Om Prakash Rajbhar faced protests as groups of Rajputs and Yadavs hurled tomatoes and eggs at his residence on Saturday.

The minister had drawn the ire of the two communities for allegedly saying that Rajputs and Yadavs consume more liquor than others. The youth mobbed the minister’s official residence , damaged his name plate and shouted slogans.

The minister had made these remarks on Friday in Varanasi. “The maximum blame is put on Rajbhars, but the maximum liquor is consumed by Yadavs and Rajputs. This is their ancestral business and the Rajbhars are unnecessarily blamed for drinking too much. If you want to know the pain, ask any mother, sister or wife to whose homes their loved ones come drunk”, he was heard saying in a video clip.

Earlier, the minister had said that “If someone offers you liquor, consume it but vote as per you discretion,” to his voters.

Youth, some of them wearing red caps, mobbed the minister’s official residence in Hazratganj area here on Saturday afternoon, raising slogans and damaging his name plate. Reacting to the minister’s remarks, Samajwadi Party president Akhilesh Yadav tweeted, “It is people who use intoxicants, not any caste.”

The minister has courted controversy earlier with his criticism of the performance of the Yogi Adityanath government in the state.

In another controversial remark on drinking, he had said, “If someone offers you liquor, consume it but vote as per you discretion.”