The floor of the train was littered with cups, pet bottles, wrappers and bags of chips, which the train staff had to clean at the end of the journey. 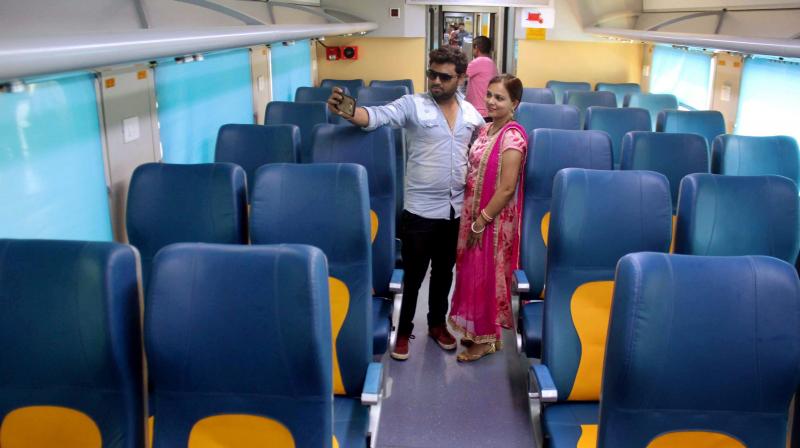 A couple snaps selfie inside a coach of Tejas Express before it was flagged off at CS Terminus in Mumbai. (Photo: AP)

Launching the high-speed and comfortable rail travel, the Indian Railways flagged off the maiden run of Tejas Express on Monday, the country’s first high-speed, amenities-rich train from CST to Goa.

Tejas, which is equipped to run at 200 kmph, will be allowed to operate at a maximum speed of only 180 kmph due to technical constraints related to tracks and signals. The train will have a capacity of 992 seats.

The Jan Shatabdi Express, which operates between Dadar in Mumbai and Madgaon in Goa, comes a close second at 160 kmph.

Amenities onboard the Tejas Express are on par with countries like Sweden and Japan known for a mix of electronic and modern comfort like Wi-Fi, fire and smoke detectors for fire hazards, on-board infotainment where up to four movies will be available for the passenger to watch on the LCD along with the USB slot to watch your own movies from pen drive.

A day after, however, the train returned to the city in a mess after some passengers thrashed the LCD screens, stole headphones, soiled the toilets and littered the entire train.

Aditya Tembe, a passenger who was travelling by economic-class on the train, said, “The toilet was soiled and was stinking as the people didn’t even bother to flush properly after they used it.”

The floor of the train was littered with cups, pet bottles, wrappers and bags of chips, which the train staff had to clean at the end of the journey.