India   All India  29 May 2018  Of our ‘Monument Mitras’ and saving India’s heritage
India, All India

Of our ‘Monument Mitras’ and saving India’s heritage

Collaborations between the public and private sector to fund culture have proved successful elsewhere. 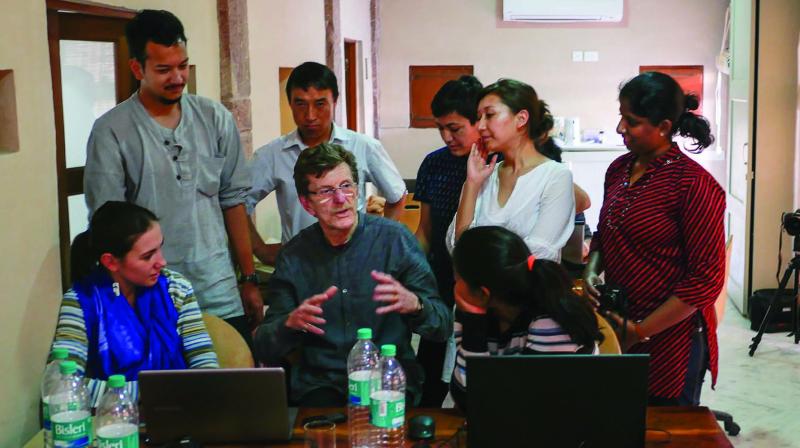 A Twitter tamasha has erupted in recent weeks, following the official announcement that the Dalmia Group would be “adopting” the Red Fort in New Delhi, as “Monument Mitras” — friends of monuments. On World Tourism Day in September 2017, the Indian government launched Monument Mitras, a new initiative in the Adopt a Heritage programme, engaging private sector partners to support 98 heritage sites by funding renovation and maintenance, building tourism infrastructure and thereby fulfilling corporate social responsibility pledges.

The battle of tweets has kindled some disputatious jousting, and a timely discourse about ownership, preservation and management of India’s cultural heritage at a time when a great many historic sites are in dire need of rescue.

The World Travel & Tourism Council reports that India is the seventh largest tourism economy in the world. In 2017, tourism revenues hit Rs 15.24 lakh crore ($230 billion), 9.4 per cent of national GDP, supporting 42 million jobs. Tourism in India is projected to expand 10 per cent by 2025, last year the Indian medical tourism sector earned $3 billion and is expected to rise to $8 billion by 2020.

In the 2017 Travel & Tourism Competitiveness Report, India ranked ninth out of 136 countries for “natural and cultural resources” but was ranked 29th for “tourism infrastructure”. Travel blogs extol India’s cultural offerings but cite inadequate facilities, poorly managed crowds, graffiti and garbage, even at Ajanta and Ellora.

In 1996, the National Culture Fund was launched with a similar goal to Monument Mitras and corporate funding for the work of the Archaeological Survey of India (ASI). The first such partnership was with the Tata group’s Indian Hotels Company Limited (IHCL), which committed `14 crore in 2002 for maintenance and support of the Taj Mahal. Collaborations between the public and private sector to fund culture have proved successful elsewhere. Italy has the largest number of Unesco heritage sites in the world, and has for years worked with corporate partners, in particular the famed Italian fashion houses, to restore and manage heritage sites. Without corporate sponsors New Yorkers would be deprived of the ballet, the opera and the symphony.

So far 31 Monument Mitras have been approved by the ministry of tourism. They range from start-ups, banks, infrastructure companies, hospitality and travel companies to a Delhi school. Private partners agree to provide services and maintenance in exchange for discreet signage, with profits supporting the ASI. Amita Baig, heritage conservationist, states: “The scheme has provided for each site to have a conservation architect to design and develop the facilities, create a visitor information centre that is credible; and most importantly, toilets and drinking water. With huge pressure on monuments and growing visitor numbers, it is simply no longer good enough to only preserve status quo which does little justice to the richness of our past.”

Dr Milo Beach, director emeritus of the Freer-Sackler Museum of Asian Art in Washington DC, writes: “Monument Mitra is potentially encouraging. Without exception, India’s monuments need protection from the wear and tear of both visitors and weather. India also needs vastly expanded training programmes in art conservation. This is an extremely exciting and rewarding field that should easily draw young people into its ranks, and a goal of such programmes should be the creation of a much larger group of Indian professionals. A very successful programme of conservation training is already underway at Nagaur Fort in Rajasthan, the Leon Levy Centre for Conservation Studies, which can serve as one model.”

HH Maharaja Gaj Singh of Jodhpur’s Mehrangarh Museum Trust partners with the Leon Levy Foundation to provide students with training in principles of conservation, technical and multi-spectral imaging, assessment of materials, analysing environment and controlling bio deterioration, skills that are increasingly in demand from the public and private sector. The Leon Levy website describes the course in detail; the focus is on students from South Asia, both experienced conservators and beginners, there is no course fee, and the Mehrangarh Museum Trust is generously providing accommodation in Nagaur Fort, as well as transport to and from Jodhpur.

The World Economic Forum recently published a white paper entitled “Incredible India 2.0: India’s 20 Billion Tourism Opportunity” which forecasts a burgeoning demand for art conservators and restorers, museum curators, archivists, photographers and technicians. Tasneem Zakaria Mehta, director of Mumbai’s Dr Bhau Daji Lad Museum, observes: “When we started the same outcry of ‘our heritage is being sold off to corporates’ beleaguered the project and caused enormous delays. Today it is recognised as one of the most successful museums in the country. The ASI has archaeologists but we expect them to be policemen, designers and marketing geniuses as well. It’s time we allow specialists in and take the benefit of their acumen. That is hopefully what this policy will trigger.”

The writer is a New York-based author and researcher who specialises in Asian history and current events.