India   All India  29 May 2019  'Singham' of Karnataka police resigns to pursue public service
India, All India

Annamalai met Chief Minister H D Kumaraswamy in the presence of state Home Minister M B Patil and informed him about his resignation. 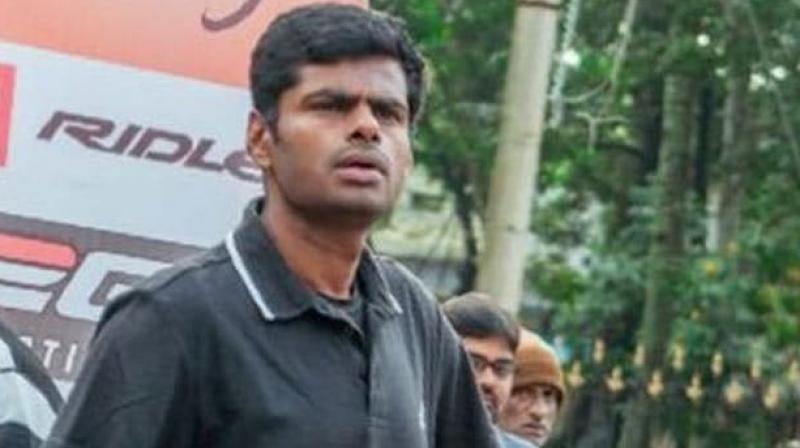 Annamalai said he was not quitting the job because of any political pressure. (Photo: Twitter)

Annamalai met Chief Minister H D Kumaraswamy in the presence of state Home Minister M B Patil and informed him about his resignation.

Speaking to reporters after meeting Kumaraswamy, Annamalai said the chief minister insisted that he reconsider his decision as the state was in need of his services, "but I told him I have made my decision, CM then conveyed his best wishes for my future endeavour."

Annamalai said he was not quitting the job because of any political pressure.

He lauded political leaders, including Kumaraswamy and former Chief Minister Siddaramaiah, for giving him the freedom to do his duty.

"The whole state has treated me with respect...I could have worked for a few more days, but some decisions had to be taken..I thank everyone," he added.

Known as "upright", "honest" and "brave" officer, Annamalai was so popular among the people during his stint as SP of Udupi and Chikkamagaluru districts that there were protests following his transfer.

On reasons for his decision, Annamalai said, "Have completed ten years in service...I believe an individual can achieve three passions in a life time, among them is public service, in civil service I think I have achieved my scope."

"So I wanted to go outside (of civil service) and do things differently. Right now I haven't taken any decision, will need three-four months time. I will think and take a decision."

Annamalai, a 2011 batch IPS officer is from Karur in Tamil Nadu. He began his career as an assistant superintendent of police, Karkala sub-division in 2013.

On joining politics, Annamalai said he has not taken any decision and not spoken to any political or politician about it. "I need 3-4 months break."

However, there were reports in the media that he was in touch with some senior RSS functionaries.

"Spoke to Annamalai, IPS .@DCPSouthBCP. He has tendered resignation today. He is plunging into politics. It requires guts, boldness to leave cushy, secure, hard earned IPS job. Its heartening to see such achievers n (sic) youngsters diving into politics. Wishing him all the best," she tweeted.