Thirteen people are in the isolation ward of the sprawling hospital, which has four branches in the city. 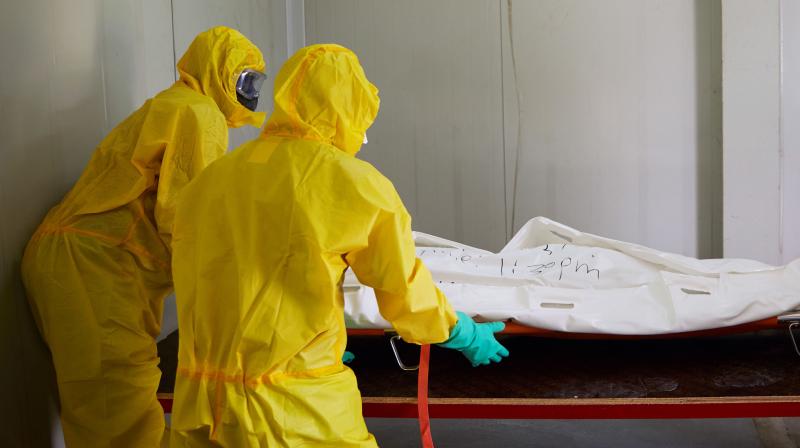 Ramavtar Gupta of Totaram Murarilal jewellers, who was in his 80s and bed-ridden for four years, is suspected to have got infected at the hospital. He died on Thursday evening. (Representative Image | AFP)

Hyderabad: A leading Hyderabad-based jeweller died, and 13 patients are presently undergoing treatment for COVID-19 at a corporate hospital.

Wealthy and well-networked individuals are allowed to be treated in five-star facilities in corporate hospitals in a “secret understanding” between certain key politicians in the state and the hospital lobby, whereas lesser mortals have to make do with the poor facilities in government hospitals.

While at least four of the 13 patients tested positive for COVID-19 and have been kept in isolation in the rehabilitation centre at the hospital, which has been turned into COVID-19 ward, one of those who tested positive was the jeweller, who died at the rehab centre on Thursday evening. Families of all the patients have paid several lakhs of rupees to the hospital for the treatment.

Hospital sources confirmed to Deccan Chronicle that a majority of the patients are elderly people who had got admitted to the hospital with different health complications. But after COVID-19 tests were conducted, four of them including the jeweller tested positive and the reports of the remaining patients, who are suspected to have contracted the virus, is awaited.

They are presently kept in isolation at the advanced Neuro and Ortho rehabilitation centre within the hospital premises, which is away from all other blocks in the sprawling hospital.

“The doctors and nurses working in the rehab turned COVID ward, who are attending to the patients, have been asked to stay put within the premises and are not allowed to go out anywhere out of the rehab centre,” they said.

As per the rules and procedures laid down by the state government, if any patient at a private hospital tests positive, then either the hospital concerned or the government authorities have to arrange for transportation of the patients and shift them to Gandhi hospital, which is exclusive for COVID-19 patients.

The hospital in question, which has four branches in Hyderabad, is among the 11 hospitals and labs that have been authorised by the ICMR to conduct COVID-19 tests. But the State government has not permitted them to go ahead with it.

The jeweller, a resident of Basheerbagh, was a man in his late eighties and was bed ridden for the last four years due to various ailments. “Four days ago, he was shifted to the COVID-19 ward in the hospital, without conducting the test initially. Two days later, he tested positive. It is likely that he was exposed to the virus in the hospital. He was kept in isolation till his death this evening,” sources said.

Strangely, none of his family members have been tested by the authorities so far, which is mandatory when a family member contracts the virus.

The jewellery store located in Abids that he owned has been running since the year 1901.