India   All India  29 May 2020  Supreme Court orders states to foot the bill for guest workers' travel
India, All India

Plus, their food and shelter while they wait for their train or bus are the states' responsibility 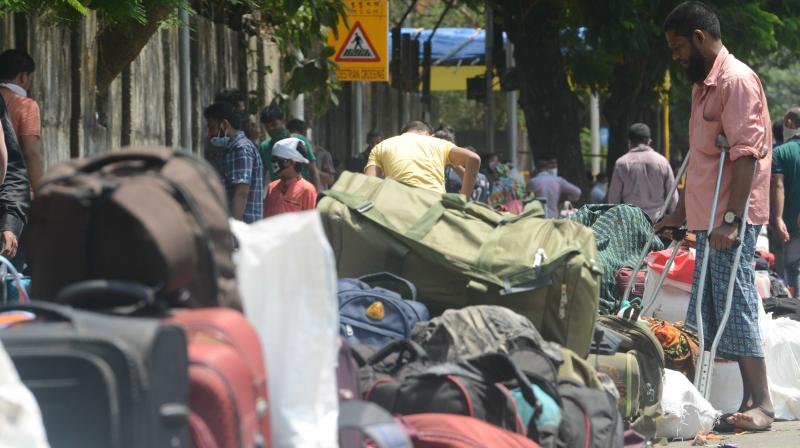 Luggage placed in a queue by guest workers outside the Chhatrapati Shivaji Maharaj Terminus in Mumbai hoping to catch a train to their native place. (AA Photo: Rajesh Jadhav)

New Delhi: The Supreme Court on Thursday ordered that no train or bus fares will be charged from the guest workers going back to their villages/towns and states, both the one from where they start their journey as well as the destination states, would bear the cost.

At the end of the hearing that lasted two and a half hours, a bench of Justices Ashok Bhushan, Sanjay Kishan Kaul and M.R. Shah, ordered: “No fare either by train or bus shall be charged for migrant workers. Railway fares to be shared by states.”

“There have been cases where one state sends migrants but at the border the other state says we aren’t accepting migrants, (so) we need a policy,” the bench observed, in an apparent reference to Uttar Pradesh not letting buses from Rajasthan with guest labourers enter the state.

The court added: “No state should have the right to reject (them)… to say no, don’t come, or we will not take you.”

The Supreme Court, hearing the case of the “problems and miseries of
migrant labourers” on a suo motu basis, saw the judges focus on travel arrangements of labourers back to their villages, payment of their fares, their food and shelter and registration.

The court told states to ensure that the labourers, after registration, must know the date of journey, and in the intervening period the state government should take care of their food and shelter.

“All migrant workers stranded at various places shall be provided food by the state/UT at places that shall be publicised and notified for the period they are waiting for their turn to board a train or a bus,” the judges said.

“In the train journey the originating states will provide meal and water. The Railways to provide meals and water in the course of the journey. Food and water to also be provided in buses,” the judges ordered.