In its report, Uttar Pradesh Police has said that Seth had not been living in Lucknow for the past one year. 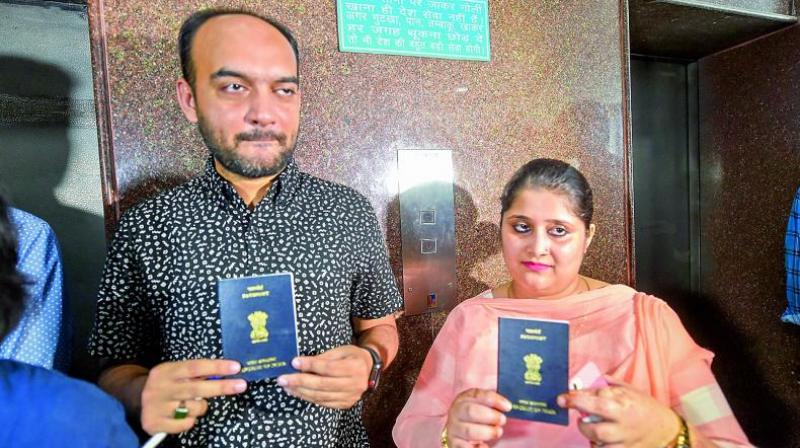 Tanvi Seth and her husband Mohammad Anas Siddiqui, who have been married for 12 years, wrote about their ordeal on Twitter and tagged External Affairs Minister Sushma Swaraj on June 20. (Photo: File/PTI)

New Delhi: The External Affairs Ministry on Thursday said the police verification report on the passport of Tanvi Seth, who had accused a Lucknow passport official of humiliating her and her husband over their inter-faith marriage, is under examination.

In its report, the Uttar Pradesh Police has said that Seth had not been living in Lucknow for the past one year. According to the police verification report sent to the Regional Passport Office (RPO), Seth has been residing in Noida.

"Police verification report in respect of Tanvi Seth has been received. We are examining the report. Our passport officers are empowered to take necessary action as per the Passport Act," Ministry of External Affairs Spokesperson Raveesh Kumar told reporters in response to a question.

Seth and her husband Mohammad Anas Siddiqui, who have been married for 12 years, wrote about their ordeal on Twitter and tagged External Affairs Minister Sushma Swaraj on June 20.

They had alleged that passport department official Vikas Mishra asked Siddiqui to convert to Hinduism and pulled up Seth for marrying a Muslim when they went there to file passport applications.

On June 21, the Regional Passport Office in Lucknow transferred Mishra and issued passports to the couple.

Following the transfer of Mishra, Swaraj was trolled on the Twitter. In protest, she had liked and retweeted the abusive tweets against her.

When asked whether the MEA is contemplating any action against trolls, Mr Kumar said, "The EAM (External Affairs Minister) has responded to those malicious tweets and the trolling which she was subjected to in her own way and in a manner which she deemed fit. I don't think I have anything further to add on that."

Responding to a question on Britain's failure to include Indian students in the liberalised visa norms, he said the matter has been taken by the Indian government.

"It was most recently taken by during the third Home Affairs Dialogue, which took place on May 30. The matter figured prominently," he said.

"We have expressed our views on this to the UK side. We will continue to pursue this with the UK government so that the interests of the Indian student community are protected," he said.