Many in Congress feel that the current spate of resignations were a tug of war between the old guard and the new guard. 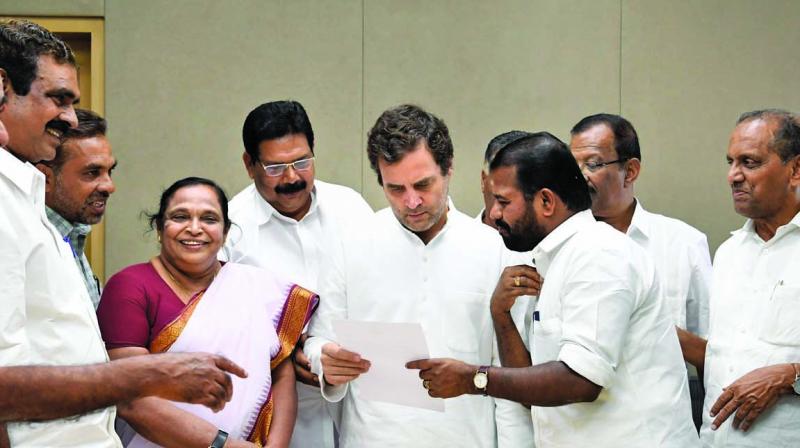 Congress president Rahul Gandhi with leaders and representatives from his Parliamentary constituency Wayanad, in New Delhi on Friday. (Photo: PTI)

New Delhi: It was raining resignations in Congress on Friday when nearly 145 AICC office-bearers, including four AICC secretaries and two working presidents, all of whom had been inducted into the party by Congress president Rahul Gandhi resigned taking responsibility for the loss in the Lok Sabha polls.

The resignations of the AICC officer bearers came after a meeting at the AICC headquarters which was attended by over 375 Congress workers. Those who quit came from different sections like PCC (state units) and Seva Dal, AICC, NSUI and Youth Congress.

The AICC secretaries who put in their papers are Anil Chaudhary, Rajesh Dharmani Virendra Rathore and Pawan Prabhakar. Many members who spoke at the meeting said that it was time that the senior leadership should also take responsibility.

Sources said that apart from chief ministers of states in which the party is in power, there were demands for resignation of all state in-charges and general secretaries.  Overseas Congress secretary Virendra Vashishtha said that another meeting would be held on July 2.

Many in Congress feel that the current spate of resignations were a tug of war between the old guard and the new guard.

Whlie announcing his decision to quit taking responsibility for the Congress’ defeat in the LS polls, Mr Gandhi had blamed certain senior leaders of not cooperating with him.