Ashok Gehlot asserted that the Congress party stands against lynching committed anywhere in the country. 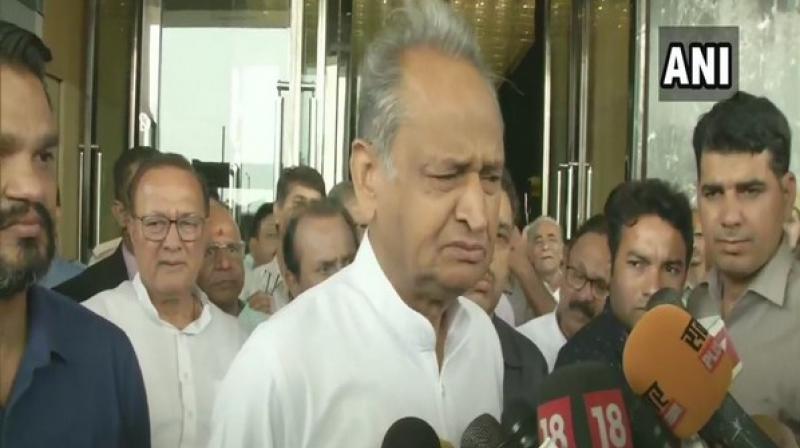 Chief Minister Gehlot's tweet comes a day after it was reported that Pehlu Khan, who was lynched to death in 2017 allegedly by cow vigilantes, was charge-sheeted for smuggling cattle. (Photo: ANI)

Jaipur: Chief Minister Ashok Gehlot on Saturday said that Pehlu Khan's name does not appear in the chargesheet submitted by the state police in December 2018, asserting that the Congress party stands against lynching committed anywhere in the country.

"News reported in Indian Express is factually incorrect. Name of Late #Pehlu Khan is not there in the chargesheet submitted by #Rajasthan Police in December 2018," Gehlot wrote on his official Twitter handle.

"The Congress party is ideologically committed against any kind of lynching anywhere in the country and our government is vigilant to ensure it will not have happened again," read another tweet by Chief Minister Gehlot.

Chief Minister Gehlot's tweet comes a day after it was reported that Pehlu Khan, who was lynched to death in 2017 allegedly by cow vigilantes, was charge-sheeted for smuggling cattle.

The Chief Minister said: "This is a separate case which was registered and investigated under the previous government in 2017-18 against three persons identified as Arif, Irshad, and Khan Mohd, transporter."

Gehlot said that the District Court had accepted the 'challan' on May 24, 2018, after the accused whose names were mentioned in the chargesheet were not present at the time of the submission of the same.

He said that his government will see if the investigation in the past was done with any "predetermined intentions."
It was claimed earlier that the state police charge-sheeted Khan and his sons - Irsad (25) and Arif (22) - under various sections of the Rajasthan Bovine Animal (Prohibition of Slaughter and Regulation of Temporary Migration or Export) Act, 1995.

The purported chargesheet against Khan was prepared on December 30 last year, 13 days after the Congress came to power in the state under the chief ministership of Gehlot in the state.

The police had earlier given a clean chit to the six people accused of lynching Khan. The decision was based on the statements of the staff of a cow shelter and mobile phone records.

55-year-old Khan, a native of Nuh in Haryana and a dairy farmer, was allegedly beaten up by self-styled cow vigilantes near Behror in Rajasthan on Delhi-Alwar highway on April 1, accusing him of smuggling cattle. He succumbed to his injuries at a private hospital on April 3.