'He might be in jail but his men are outside. We are being threatened by his men,' said the mother of the survivor. 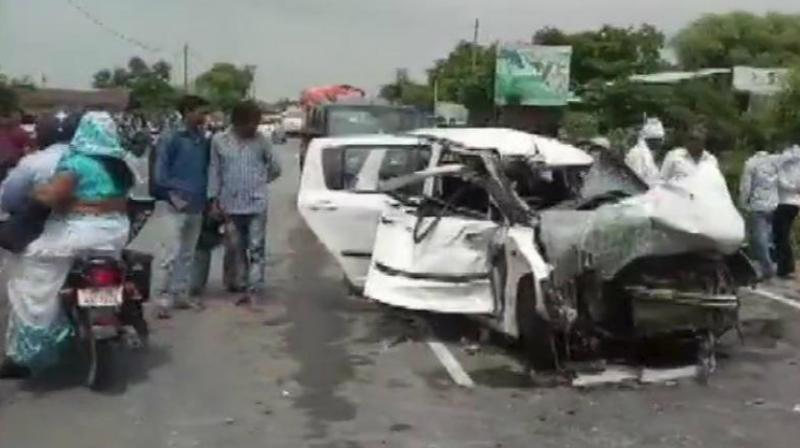 Their car in which they were travelling in rammed into a truck. (Photo: ANI)

Lucknow: The Unnao rape survivor and her family have alleged that BJP MLA Kuldeep Singh Sengar and his men were behind Sunday’s accident.

The mother of the survivor said, “Sengar's men are behind this incident. He uses a cell phone from inside the jail. He might be in jail but his men are outside. We are being threatened by his men continuously.”

Adding to allegations, the survivor’s sister said that they had been receiving constant threats. “People even follow me when I go outside. One of the henchmen of the MLA, Naveen, had threatened my aunt of dire consequences,” she added.

On Sunday, the survivor and her family met with an accident when their car had a head-on collision with a truck in Uttar Pradesh’s Rae Bareli. The two of the survivor’s aunt succumbed to their injuries, while her lawyer, who was driving the car was injured. The condition of the survivor is still critical.

The family was travelling to meet the survivor’s uncle who is serving a life term at a Rae Bareli district jail.

The Unnao rape case came to light in April last year, when the woman attempted suicide outside Chief Minister Yogi Adityanath's house. She alleged that in June 2017, she was sexually assaulted by the BJP MLA when she went to his house with a relative to seek a job.

She also alleged that the police did not act on her complaint though she had approached them several months earlier. Later, the case was transferred to the CBI after protests broke out and Sengar was later arrested.

On April 3, the survivor’s father was also beaten up allegedly by the MLA's brother Atul Singh and others in the village. He was sent to jail on various charges as well as under the Arms Act. On April 8, survivor’s father condition deteriorated inside Unnao jail and he died in custody.