India   All India  29 Jul 2019  UP Police use drones to monitor Kanwar Yatra pilgrims
India, All India

UP Police use drones to monitor Kanwar Yatra pilgrims

The Kanwar Yatra is an annual pilgrimage of Lord Shiva's devotees, which started this year on July 23.. 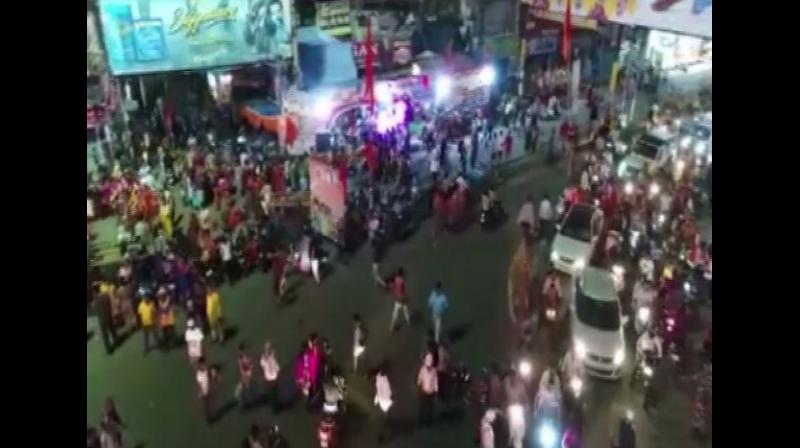 Meerut: As the saffron-clad 'Kanwariyas' return from the holy city of Haridwar from the annual pilgrimage, the Uttar Pradesh Police used drone cameras to aerially monitor their movement.

The arrangements were made to ensure smooth conduct of the Kanwar Yatra.

As the scores of devotees entered the area near the Begum Bridge of the Meerut city, the police officials showered them with flowers.

Yesterday, flower petals were also showered on the devotees from the helicopter at a couple of locations in Haridwar.

As many as three crores saffron-clad pilgrims have thronged the holy city of Haridwar to take a dip and collect the water from the river Ganga.

The Kanwar Yatra is an annual pilgrimage of Lord Shiva's devotees, which had started this year on July 23.

Around this time of every year, scores of these devotees from across India, often wearing orange-coloured clothes with decorated pots on their shoulders, undertake the pilgrimage, called Kanwar Yatra, on foot during 'Saavan'- a month in the Hindu calendar.

These pilgrims, majority of who are young men, visit Haridwar, Gaumukh, and Gangotri in Uttarakhand and Sultanganj in Bihar to fetch waters of River Ganga.
Later, the holy water is dispensed as offerings to Lord Shiva in temples.