While the rest of the COVID-19 frontline states continue to scale higher numbers, Delhi's caseload is easing 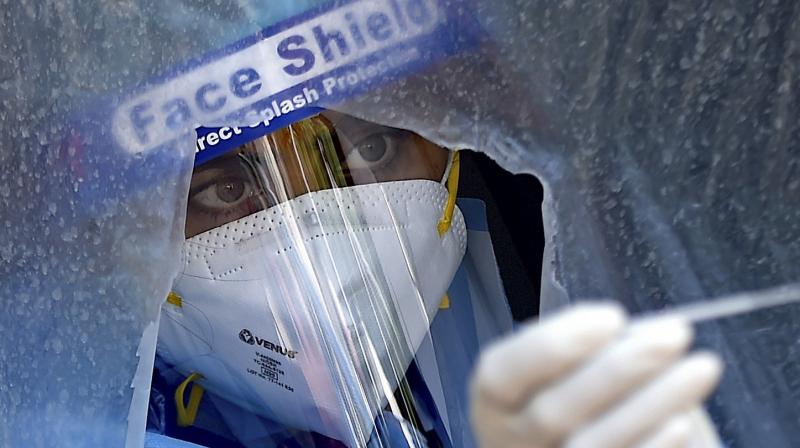 A health official wearing a PPE suit collects a swab sample from a resident (not in picture) to test for the COVID-19 coronavirus at a temporary testing facility in New Delhi on July 28, 2020. (AFP)

New Delhi: India’s coronavirus tally stood at 15 lakh on Wednesday morning after a leap of more than 49,000 cases on Tuesday. Deaths topped the 34K mark, with 770 fatalities on Tuesday.

The Union government turned the conversation to the case fatality rate (CFR), which has fallen to 2.25 per cent. The CFR was 3.33% in mid-June. India’s COVID-19 death rate (deaths per million population) is 25, which is much lower than the three-digit numbers seen in USA, Brazil, Italy, and Spain but much higher than the 3 per million recorded by China.

The government is claiming that the low fatality rate is not a statistical occurrence but a feat wrought by clever strategy: that of prioritizing symptomatic cases over asymptomatic ones so that hospitals are unburdened.

The recovery rate has seen a sharp increase from around 53 per cent in mid-June to more than 64 per cent as of Tuesday. With 35,176 patients discharged in the last 24 hours, the total recoveries stand at 9.88 lakh.  For the fifth day in a row, India saw more than 30,000 recoveries in a day while new cases are stayed above the 45k mark for the sixth day running.

According to economist Prof Shamika Ravi, UP is witnessing faster growth of infection (5.4%) compared to the rest of India (3%). Its daily new cases are around 2700. She said that though UP is testing significantly more than the all-India average, it has to significantly improve contact tracing to identify 'super-spreader' clusters.

Of the frontline COVID states, Delhi is only territory where the corona peak is promising. New cases have fallen sharply from 2889 on June 28 to 1056 on Tuesday night. Similarly, the daily death count has fallen from a recent peak of 81 on July 4 to 28 on Tuesday.