India   All India  29 Aug 2017  Amid torrential rains in Mumbai, BMC cancels leaves of all its employees
India, All India

Amid torrential rains in Mumbai, BMC cancels leaves of all its employees

BMC PRO said that BMC has cancelled leaves of all employees and has asked them to join back. 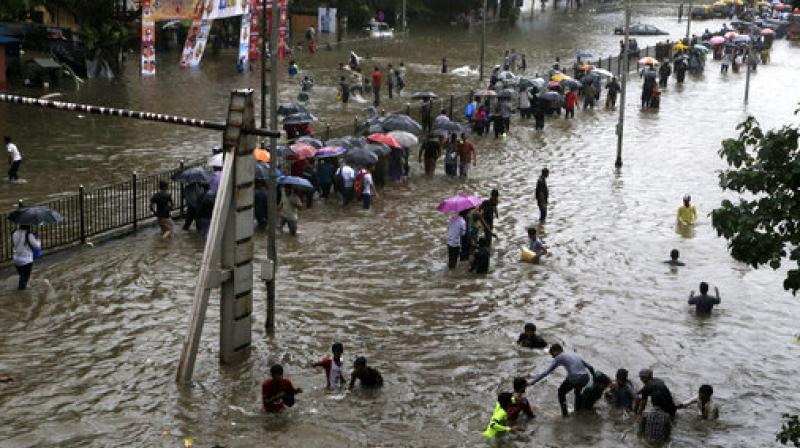 Mumbai (Maharashtra): The Brihanmumbai Municipal Corporation (BMC) on Tuesday cancelled the leaves of all its employees and asked them to join their duty in the wake of torrential rains in the city that brought the commercial capital of India to a standstill.

BMC PRO said that BMC has cancelled leaves of all employees and has asked them to join back.

According to BMC Control Room, 200 trees/ branches fell and 70 short circuits were reported till Tuesday evening.

As various regions of Maharashtra are receiving incessant downpour since yesterday, the India Meteorological Department (IMD) has informed that there would no relief for the state in the coming hours and heavy showers are expected to continue.

The traffic in Mumbai has come to a standstill owing to the heavy downpour.

Central Railway said that Kopar Khairane-Thane transharbour services and Kalva-Thane suburban services have been suspended due to water logging.

Western Railways said that services between Churchgate and Andheri are still suspended because of heavy rains and water logging (upto 300mm above rail level) between Lower Parel, Elphistone and Dadar.

A tube boat is being used for rescue operations in Dadar,which is facing massive water logging.

Maharashtra Chief Minister Devendra Fadnavis said that due to IMD warnings, people in Mumbai and areas around the city are advised to stay home unless there is an emergency.

Fadnavis also instructed suspension of toll collection at all Mumbai entry points and sea link till situation is back to normal.

"Govt and public agencies taking all steps amid heavy rains. Glad to note voluntary groups and citizens too coming together (sic)," he added.

In a series of tweets, the Prime Minister said that he also spoke to Maharashtra Chief Minister Devendra Fadnavis on the situation arising due to incessant rain.

Home Minister Rajnath Singh said he spoke to Fadnavis and promised all possible support from the Centre.

"Had a telephonic conversation with Maharashtra CM Shri @Dev_Fadnavis regarding the situation due to heavy rains in Mumbai and nearby areas (sic)," he tweeted.

"I also assured the Maharashtra CM of all possible help from the Centre. The NDRF teams have already reached Mumbai for rescue & relief ops (sic)," his another tweet said.

Indian Navy said that it had pressed five flood rescue teams and two diving teams to render assistance at different locations across Mumbai.

Siddhivinayak temple is providing shelter, tea and snacks to people stuck in the area.