The reality is that the struggle which is limited mainly to the Valley, involves less than 0.3 per cent of India’s population. 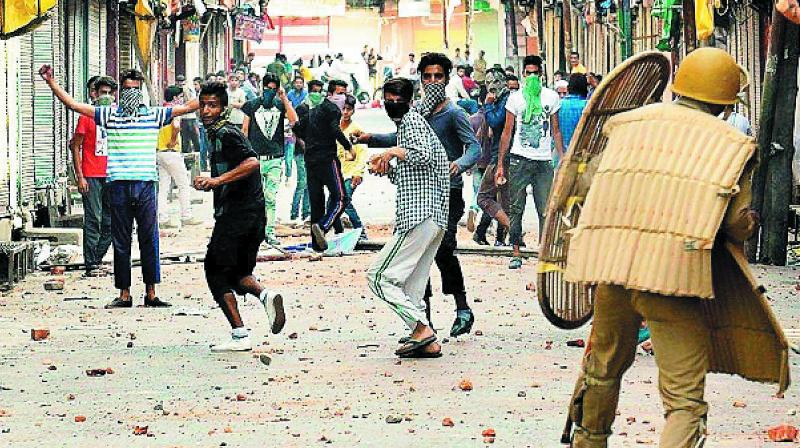 A file image of stone-pelters in Kashmir targeting CRPF personnel.

Satya Pal Malik has taken charge as the 13th Governor of J&K on Aug 23, 2018, the first politician to be selected for this assignment after 51 years. With the state being under Governors rule, it is evident that the Central government is renewing its efforts for a political solution.

Statements of ‘winning hearts and minds’ and ‘willingness to talk to all concerned within the framework of the Constitution’ have been made. To many of these are clichés with little meaning unless backed by clear policy statements, which in-turn could serve as the basis for a fresh approach.

It is thus, essential to examine what these could be. There is little hope that Imran Khan’s election as Prime Minister of Pakistan will bring about any shift in the Kashmir policy of the deep state. Hence, the certainty of continued Pakistan Jihadi sponsored terrorism is a given. Thus, in recalibrating our strategy, the fundamental issue that the struggle which is be-ing sustained by the philosophy of Islamic Jihad can succeed, needs to be decimated.

After 71 years of independence and numerous failed attempts by Pakistan, two questions emerge. Can Kashmir be forcibly separated from India? J&K is a frontline state having unsettled borders with nuclear armed Pakistan and China. Both work in collusion and have adversarial relations with India.

Political costs of any territorial concession will have far reaching repercussions for both the security and federal structure of India. In fact, some contend it could lead to break up of India as a country. It follows that India will do everything within its power to maintain the unity and integrity of J&K. The second is a historical issue? Has any Islamic struggle in the last Century succeeded? The answer is an emphatic no.

The only possible exception being Iran. That however, was an intra-Muslim struggle against the mona-rchy and cannot count. From Africa, to the Middle East, and parts of Asia, struggles for Islamic supremacy abound. Some of these have gone on for decades and have only brought about ruin and despair. There is no example where such a conflict has led to prosperity and well-being of people.

The case in J&K is no different. With territorial concessions off the table, the important message is that whatever settlement has to be reached that has to be within the territorial and constitutional limits of India.

This leads us to the third logical question, what sustains the present uprising, which is doomed to failure? One obvious answer is the Pakistan Army and its strategy of 1000 cuts and proxy war against India. The second, which is not really mentioned, is the fact that a very large number of citizens in J&K benefit from terrorism as an industry.

Kashmir has the highest per capita funding in the country from the Centre. There is a growing perception among some sections of society and the political fraternity, that maintaining unsettled status of Kashmir is necessary to keep the pipeline of Central assistance flowing. Militancy, thus, is politically motivated in collusion with Pakistan to keep the pot boiling, all this while the gullible populace suffers.

Time has now come for a complete change in tack and place correct facts before the people through a sustained campaign that they are being misled to ruination. The situation is not dissimilar to that of Punjab in the early 90s when realisation dawned that the Khalistani movement was a ploy to benefit the select few.

Terror tactics including killing of government personnel, were employed to intimidate. This realisation was exploited under the President’s rule and people slowly turned around and rose in support.

Times and means of communication have changed. There has to be vigourous and single-minded crusade to bring out the futility of struggle and expose the beneficiaries. This is bound to be questioned as changing the mindset especially amongst the youth, will be an uphill task. The alternative of job creation and growth leading to peace and prosperity has to be cogently presented.

The reality is that the struggle which is limited mainly to the Valley, involves less than 0.3 per cent of India’s population. By no stretch of imagination, can it ever succeed? It is thus, a struggle in futility. Tourism, handicraft, fruit and pisciculture as also the service sector, offer immense scope for empl-oyment. The new tunnel impro-ving road connectivity and the under-construction rail link, present vast opportunity. Himachal Pradesh for one has benefited greatly from the turmoil in J&K and can serve as an example.

The bleak future of an ongoing conflict and unsettlement, versus, benefits of peace and tranquillity thus, need to be pushed. Past examples within the state are available. Howe-ver it has to now become a political mission.

Those who benefit from mayhem also need to be convinced that they will gain more from benefits of peace. Every incident of external abetment and how it is harming people must be exposed.  Ruthlessness of the deep state in Pakistan, which on one hand wishes to promote its existence by creating instability in India and on the other, uses aircraft and heavy weapons and artillery against it people, can be exploited.

It has to be directed tow-ards the youth and explained that Aaazadi truly implies equal opportunity for all, freedom from corruption, nepotism, economic enterprise, being misled, et al.

The perception in respect of past attempts, is that most of the efforts have been defensive.  This has to change a proactive ‘Iron fist in a velvet glove’ approach where the political leadership needs to send out a clear and unequivocal statement that terrorism will never succeed.

Acts such as stone pelting on state functionaries are criminal acts, which will invite severe action. There is to be direct talk that continuing with this vain struggle will only enhance their period of misery, while rest of the nation leads the world in growth. With growing awareness, time is ripe for the tide to turn.

It is a battle against an indoctrinated young mind. In addition to the political class it thus requires an integrated appro-ach involving psychologists, public relations personnel, religious teachers, social media experts, academics and so on. It sounds too simple to be true, but as has been repeatedly proven, it is the most of simple of plans executed in a dedicated manner, which can achi-eve success. It is now opportune for this in J&K. Another historical precedent, Srinagari was foun-ded in 250BC by Emperor Ashoka who, by realising the futility of conflict, turned to tolerance and amity to usher in a golden age. Can it not be so today?

The writer, a retired lieutenant-general, is a former GOC-in-C of Southern Command and a member of the National Security Advisory Board