In relating the third limb of yoga, the asanas, to dance, we are told how body positions transform us spiritually. 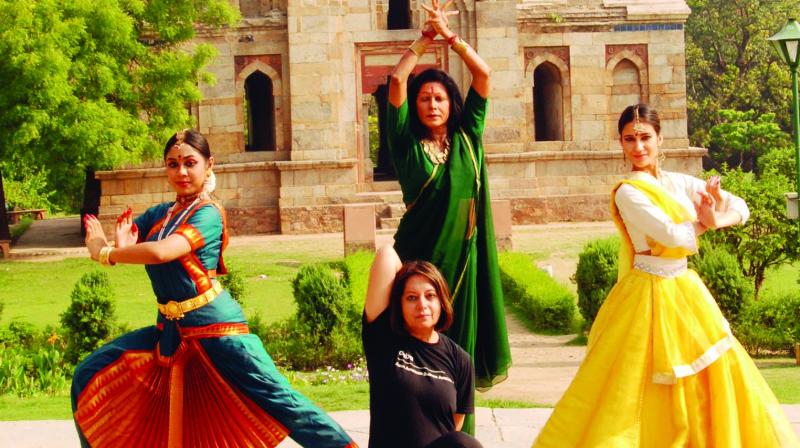 Personal reminiscences are sprinkled throughout the book, with informal anecdotes about the authors’ self-discoveries through yoga and dance.

Yoga has come into a well-deserved period of efflorescence after millennia of quiet continuity and a bump during the 1960s when it was phoren-returned from the West. The various schools of Hatha Yoga all follow principles found in Patanjali’s ashtanga yoga and many go beyond basic physical training in asanas and pranayama to the deeper profound dimensions of yoga.

The integral connections between classical Indian dance and yoga are perhaps less generally known, even though institutions like the Central Sangeet Natak Akademi (SNA) and the Indira Gandhi National Centre for the Arts (IGNCA) have presented outstanding multi-day lectures and demonstrations focused on this theme.

The recently released Illustrating Classical Indian Dance Through Yoga, co-authored by Shovana Narayan and Anita Dua, clearly and systematically share these similarities. I would presume that most classical dancers are aware of the yoga of their dance, but the care taken by the authors to deconstruct the elements for comparison goes far beyond what the vast majority of us could articulate. Shovana found surprisingly little actually written on this when the Shubhi publisher, Sanjay Arya, suggested the theme for her to research for a book.

Anita Dua, trained for years by her Pune neighbour, Yogacharya B.K.S. Iyengar, supports Shovana’s comparisons with solid visual and textual information. The result is a book accessible and of interest to the general reader while of solid use for dance and yoga teachers and practitioners.

Two months of twice daily two-hour sessions of Sivananda yoga in the beautiful University of Michigan arboretum during college was my first in depth yoga experience. I was already well aware then of the influence of yoga asanas and pranayama on the development of various 20th American modern dance techniques. It helped thoughtful dancers use the breath, grounded movement and other aspects to move their dance expression out of the box of classical western ballet aesthetics.

Historically, both yoga and Indian classical dance traditions share Vedic roots in the ancient texts of Patanjali Yogasutra and Natyashastra, respectively. Their connections range from mudra to mokshya. For both, the body is a temple and the dance/asana is one’s prayer.

The basic tenets of yoga are laid out systematically in order to compare them.

Yama (restraint), niyama (disciple), asana (body postures), pranayama (breath control), pratyahara (control over senses), dharna (keeping the mind steady), dhyana (when mind is fixed on internal or external point) and samadhi (supra-conscious absorption into the true nature of self) are the eight limbs of Patanjali’s Yoga. Shovana parses these further to illustrate in word and image that yoga and dance are two sides of the same coin.

For example, Shovana writes “Since the universe is considered to be a manifestation of pure consciousness, Yoga Tantra envisages Shiva as the static, formless quality and Shakti as the dynamic creative aspect. Both dance and yoga are involved in the awakening of ‘kundalini’ energy, the power of consciousness lying dormant at the base of the spine. This energy, when awakened, leads to the ultimate state of ‘samadhi’; the state where one attains complete supra-consciousness and absorption into the ture nature of self, that state where the dancer and dance become one and the dancer becomes the dance.”

Yama, restraint, the first limb of yoga, is part of dance as the guru, remover of darkness/ignorance, asks the disciple to be truthful, focused on one’s own dance, coming humbly with an empty bowl rather than one already filled with ego and refraining from meaningless comparisons irresponsible criticisms.

One of the aspects of niyama, the second limb of yoga concerning rules of conduct, is the simple but profound example of saucha (purity) in relation to food. Awareness of the impact of sattvic, rajasic and tamasic foods is useful for both dancers and yogis in maintaining calmness and clarity of mind.

In relating the third limb of yoga, the asanas, to dance, we are taken from how body positions transform us spiritually to the benefits on the physical level. “The practice of dance and yoga is directed at awakening kundalini. asanas, pranayam (breathing) uncoil and alert the chakras, thereby activating the nadis.”

Quite a number of asanas of Hatha Yoga are analyzed and visually shown in parallel with mandalas, sthanaks and some of the 108 karanas of the Natyashastra. The first, Brahma Sthanak in dance, is defined as equivalent to the padmasana of yoga and   accompanied with clear details of the technique. This and others cover pages upon pages of side by side photos to let the reader consider the aptness of the authors’ comparisons. Even the Chakrasana in yoga in which hands reach the floor in a back bending arch are matched to the Gotipura bandha poses of Odisha, a form that still maintains many karanas absent from other Indian dance traditions.

Mudras (hand positions) are an essential element of Indian dance forms, used in both expressional and non-expressional dance.  Shovana writes: “The mudras in both yoga and dance are higher practices which lead to the awakening of prana, chakras and kundalini (the cosmic energy which lies coiled like a serpent at the base of the spine). Advanced practitioners or dancers may experience mystic powers or siddhis!”

With no such mystical personal experience as I am too far from being an advanced practitioner, I appreciate the motivating concept and certainly do use the yoga Chinna mudra in meditation which seems the same as the hamsasya (eye of the swan) mudra I use constantly in Odissi dance and which Shovana terms a variant of the kathak dhyama mudra or gyan mudra (gesture of consciousness). Shovana includes a wonderful quote on this from a traditional Kathak sewak at the Deogarh temple, Jharkhand, “The original kathaks being themselves ‘yogis’ or practitioners of yoga owing to their profession of temple priest sermonisers, automatically translated aspects of yoga to the dance form. Believing that the body has to be in a positive and receptive state as a prelude to ‘sadhana’ and the flesh has then to be ‘awakened’ from dormancy, this can be achieved through a proper basic position of the dancer.” Thus the Dhyana and Chhina Mudra became the basic mudra of Kathak.

After making clear specific single and double hand mudra comparisons, pranayama and pratyahara in dance is covered. Without question, the Kathak dancer’s recitation of bols, padhant, interspersed with dance is an excellent example of the control of breath essential in a dancer’s training and practice. Internalization is essential for dance to rise above a display of mere physical skill which reflects the pratyahara, fifth stage of Ashtanga yoga.

Personal reminiscences are sprinkled throughout the book, adding informal anecdotes of the authors’ discovery process in yoga and dance. Shovana concludes that “spectators of the arts, much like a yogi, are moved to evaluate and feel the spiritual values innate in themselves, as they rise to a higher level of consciousness”.

A visiting dancer/houseguest here to teach a workshop leafed through Illuminating Indian Classical Dances Through Yoga as I was finishing this article and immediately asked where she could buy a copy. Couldn’t ask for a better recommendation!